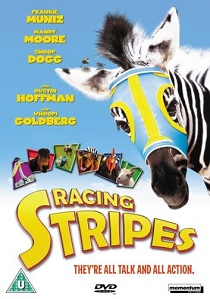 When a circus trailer is forced to stop at the side of the road to repair a puncture during a heavily downpour, a young male Zebra is accidentally left behind in all the haste to pack up and stay dry. Rescued by the passing Nolan Walsh, a local farmer and horse trainer, the aptly named Stripes is taken back to the small Walsh farm for his daughter Channing to look after until someone claims him. However, when no one comes searching for Stripes they adopt the Zebra and Channing takes the young animal under her wing. Stripes soon makes plenty of new friends on the farm including Tucker the Shetland Pony, Franny the opinionated goat, Goose the hit Pelican, who's a bit chicken, Reggie the farm's alarm cockerel and Lightning, a lazy dog whose name is the only energetic thing about him.

But growing up on a farm surrounded by race horses, Stripes truly believes that he is a pedigree race horse that is destined to enter and win the local derby. Trouble is, he is ignored by all of the other horses on the paddock and they certainly wouldn't even consider a funny looking animal beating them at their own game. But with the death of Channing's mother during a horse race some years back, Nolan has always been very reluctant to allow Channing to race a horse. In fact, it's main the reason why he gave up training the many winners of stuffy local horse owner Clara Dalrymple.

But when Clara jokingly invites Stripes to enter the Kentucky Open he finally relents and decides to allow Channing and Stripes to enter the race. But with field full of the finest horses, and some tempting bets in the air, both Nolan and Stripes are going to have their work cut out if they are to be ready for race day. However, when pure pedigree racehorse Trenton's Pride and his wicked father Sir Trenton tell Stripes that he is a really a Zebra and not a horse it destroys both his self-confidence and his dream of running in the derby. But with the support of a fine-looking filly called Sandy, the ever helpful and hungry horseflies Buzz and Scuzz and the rest of his farmyard friends, Stripes has all that he needs to overcome both his fears and the prejudices of the other race horses.

The picture is outstanding with a wonderfully rich and detailed picture which goes to prove just how good DVD can be. The variety and definition of the colours are truly amazing with the rich and lush greens of the farm and the huge array of colours at the race track are nothing short of stunning. With it being such a recent release, and the amount of CGI tinkering going on, there are no signs of artifacting whilst black levels remain impressive throughout. There is the occasional problem with outlining but this tended to be restricted to CGI mouth movements of the various animals whilst certain full CGI versions of Stripes were also fairly obvious. The transfer is also near perfect with no problems with dust specks or other forms of picture imperfections. Given the nature, and target audience, of the film it's a remarkable feat indeed.

The 448 Kbps soundtrack is reasonable enough and from the moment the film starts you find yourself right in the middle of a heavy thunderstorm and with rain, thunder and the musical score filling the entire soundstage. It's an impressive sounding start to the film and there's nothing better than weather to show off a surround system. However, once the scene finishes the surround channel goes surprisingly quiet with only the occasional use by the musical score. Never the less, the dialogue is crisp and clear in the heavily biased centre channel whilst the front channels offer some good stereo steerage. Unfortunately, from that impressive start Racing Stripes ultimately disappoints in the sound department stakes.

The menu is nicely animated and scored with the occasional smart set of comments from horseflies Buzz and Scuzz. The menu transitions are also animated and scored with yet more comments from the wisecracking flies whilst each menu is pleasantly laid out and easy to navigate through. It's all very child friendly, and given this, there's a surprisingly varied selection of extras which will not only appeal to the younger members of the family, but just about everyone else too.

The main extra on the disc is the full length Audio Commentary from director Frederik Du Chau which, considering that this film is aimed at the younger end of the market, is always a welcome additional for film fans. The commentary itself is interesting and insightful, especially when there's animal actors and special effects to talk about, and there's plenty of trivia and amusing stories to be told. However, even though it is one of the most child friend commentary tracks I've ever heard, the kids still aren't likely to be that interested. It's something to save it for a repeat viewing once the children have gone to to bed.

In the one and half minute Alternate Ending we get to see the results of a bit of interbreeding between a Zebra and a horse. With the rather abrupt ending of the film this would have been an interesting addition to the film and I'm not actually sure just why it was removed from the film in the first place. The eight minutes worth of Barnyard Outtakes are not quite the collection of outtakes you might expect, but rather a selection of unrendered, extended or deleted scenes. It's hardly a Pixar outtake section and it's ultimately rather disappointing. The six minute How to Make Animals Talk featurette is interesting enough but far too child friendly with too little detail on the actual animation process. Still, with behind the scenes footage and interviews with the various actors recording their voices, director Frederik Du Chau and editor Tom Finan manage to describe how they went about filming with the animal trainers and then applying the CGI effects afterwards.

The ten minute Animal Acting 101 featurette is again reasonable enough and goes behind the scenes with the various South African animal trainers as they get to know, and train, their film star friends. Voiced by Frankie Muniz, it sounds and looks very child friend and to be honest there's not enough detail for my liking. Never the less, it still manages to be interesting and it shows just how attached some of the trainers became to their animals. Next up are five Deleted Scenes running for around two and half minutes. They don't really add anything to the film and the scenes containing any of the animals talking is not CGI rendered.

Along with plenty of clips from the film, the four minute PR friendly The Music of Racing Stripes with Sting and Bryan Adams featurette interviews both artists as they come up with the rather good musical score. A child friendly DVD wouldn't be child friendly without a couple of things to keep the kiddies happy, so the little ones are covered with the Buzz and Scuzz's Flying Fiasco game plus the rather impressive Virtual Comic Book. Things are all rounded off nicely with the Theatrical Trailer. All in all, it's a surprisingly good selection of extras which both children and adults alike will enjoy.

Although it's only a film and there's plenty of CGI and animatronics at work, for me at least, two questions have been answered by Racing Stripes. First, has anyone ever tried to ride a Zebra, and secondly, considering they have to flee from lions and other predators in the wild, can they run as fast as a horse? Apparently, both these questions have been answered with a resounding yes. However, I'm still left wondering just what happened to all of the animals after filming had been completed. Rumours have always abound that the pig from Babe found his way to butchers, so let's just hope that the various animals here have received the care and attention they deserve.

Racing Stripes will have you shouting right up to the finishing line and it's a film that even the hardest of noses are sure to enjoy. After all, just how can you not be taken in by the opening scene of a cute looking baby Zebra calling for its mother? It may well be targeted at a younger audience, but with some clever CGI and Dustin Hoffman providing the voice for a Shetland pony, you really can't find too much to get grumpy about. It's all so predictable, but it's wonderful family entertainment with some superb CGI animation that will have you believing that animals can indeed talk. Highly recommended.