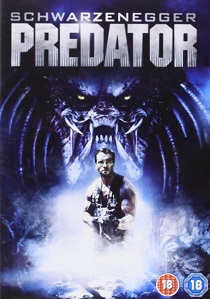 When a crack team of commandos is sent into a South American jungle to rescue a group of hostages. But things are not quite as they seem as the CIA has mislead the team in order to get them to extinguish a group of guerilla fighters who were planning on invading a neighbouring country. Never the less, the team carry out their mission with ease and head back out into the jungle to be picked up by helicopter.

However, the group are about to be tested to the fullest as they are being hunted one by one by an invincible, and invisible, predator. The groups massive array of weapons is of no use against this silent and deadly killer as it moves undetected through the jungle. With the group being picked off with ease Major Schaefer decides to make a stand and fight for it whilst there is still a group left.

The picture can actually be rather poor. Although the bit-rate remains above average, certain scenes were hideously grainy and there were plenty of picture imperfections. However, this seems to be glitch as this only effects the initial portion of the film. It is almost as if we have two versions of film stock. Once the initial picture problems have cleared, the jungle scenes have plenty colour depth and detail. For a film now nearly fifteen years old it really has stood the ravishes of time well.

The sound is reasonable enough with some good use of the surround channels by the effects and musical score. The attack on the rebel camp is especially good with gun fire and explosions flying around the soundstage. However, the dialogue level could be too low and I had to keep adjusting the volume just to hear what they were saying. Unfortunately, this meant some hasty adjustment whenever the action kicked in.

The menu is a boring static and silent affair. The extras, to say the least, are very poor with only the Theatrical Trailer provided. With Fox's other newer titles coming laden with interesting material, I can only assume that they don't particularly care about their back catalogue material.

With all of the problems with the picture quality and the lack of extras this is still an excellent film to own. This is from when Arnie was the business and everything and anything he made would be a box-office smash. Perhaps he should look to the past before making any more decisions on future ventures. It really puts "Jingle all the way" into perspective doesn't it?