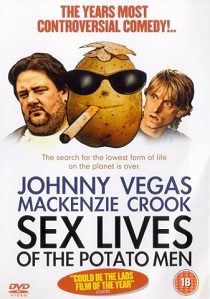 Dave, like most of his potato delivery work colleagues, is the ultimate shallow male. He's untidy and although he's "given" his wife the daughter she wanted, he'd rather be the Neanderthal hunter gatherer where sex and relationships are uncomplicated. Needless to say, his wife is hardly impressed with his attitude and he's soon sent packing. Free from his marital shackles he's soon off organising a three-some and attempting to enjoy life to the full.

Meanwhile, his best friend and work colleague, Ferris, is having a few problems of his own. Separated from his wife, and being rather well endowed, he has an active sex live. However, this doesn't mean that every encounter is enjoyable as, by living rent free with his mother in law, she expects a few "favours" in return. Desperate to escape her clutches he resorts to sleeping in the storage cupboard of the local chip shop.

Their work colleague Tolly is equally single, having being recently dumped by his drug crazed girlfriend. Tolly is obsessed with finding the perfect replacement for the taste his ex's naughty bits which he enjoyed covering in jam and then licking off. As a result he will only eat jam sandwiches with various fishy contents in an attempt to recreate its wholesome flavour. Needless to say this repulses his friends and when Dave temporarily moves in with Tolly he discovers that his personal habits are enough to make anyone run for the hills.

Finally, there's Jeremy, the boss of the potato delivery empire. He too is having problems and just won't accept that he's been dumped by his girlfriend Ruth. And when he discovers that Ruth has another boy friend he turns into the ultimate weirdo stalker and even resorts to kidnapping Ruth's dog.

Will these low life potato men ever find salvation?

The picture is surprisingly bright and colourful with a high bit-rate throughout. Even for a low budget production such as this, the picture is sharp and free from signs of artifacting, outlining or pixelisation. The picture transfer is also remarkably clean and exhibits no signs of dust scratches or other imperfections and must surely indicate some use of digital video technology. To say that I was shocked by the excellent picture quality is a bit of an understatement, and considering it's tiny budget the picture quality is nothing short of remarkable. Let's hope all budget films can produce results such as this.

Whilst the picture shines, the sound rather disappoints with a mere 192Kbps Dolby Digital 2.0 soundtrack. Mind you, with the dialogue intensive nature of the film there's little need for anything fancy. However, the wide ranging use of a musical score would have unquestionably benefited from a 5.1 soundtrack, but if you feed it through your surround sound system it will produce a half decent result. It may even be worth checking out the soundtrack CD

The main and sub menus are pleasantly scored and animated with various clips from the film, whilst the extras let the side down with a rather poor showing. Although it is completely unintentional, the funniest feature on the disc is the highly amusing English descriptive audio track where the narrator tries to describe rude gestures, sex toys and the potato men's various sexual antics.

The seven minute Featurette is short, but fairly reasonable, with interviews with the director/writer and the principle cast members. They mostly discuss the storyline and the subject matter but still manage to do the usual bit of self congratulatory back slapping (although it's certainly not as much as the usual documentaries). It's all rounded off with the ultimate in padding material - the Theatrical Trailer.

If there's one thing that will make someone go out of their way to watch something is abject criticism, especially from that voice of the people - The Daily Mail. Their film critic slammed the Sex Lives of the Potato Men for being crass and crude as well as complaining about it being part funded by a lottery grant from the film council. Fair enough, each and everyone to their own, but as I have no interest in ballet or the other arts can I complain about their excessive lottery grants being a complete waste of money too?

But enough of my ranting. The real question is, is Sex Lives of the Potato Men any good? Yes and no. There's plenty of hilarious scenes, usually containing Johnny Vegas and some brilliant one-liners, and I'll never be able to face a jam sandwich ever, ever, ever again. But, as one friend pointed out, the whole film seemed to a series of sketches for Johnny Vegas and whenever he wasn't in a scene it all fell rather flat. Never the less, it's certainly not as bad as what the The Daily Mail made out, nor is it the classic British comedy the writer hoped. However, it is still the perfect film for a post pub Saturday night. Definitely one to consider renting for a night in with the lads.