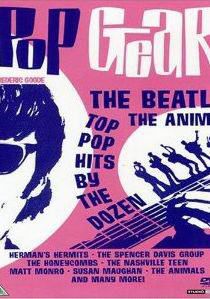 ReviewTV SeriesMusic
Review Article Go back to homepage
Goodness, what a year 1964 was. Presented by legendary DJs, Pop Gear is a pop musical extravaganza the like of which has never been seen before - or since!
Jimmy Saville, Various Artists
Music, Television
2
1 Hour 7 Minutes
Thank you for supporting DVD365.net when you order using the link(s) below.
Buy DVD
Story

Goodness, what a year 1964 was. The federation of Rhodesia and Nyasaland was dissolved, Beatlemania arrived in America, the first Ford Mustang rolled off the assembly lines, the Rolling Stones released their debut album, BBC2 started broadcasting, the Vatican got rather upset about the female oral contraceptive pill, the Forth Road Bridge opened over the Firth of Forth (what happened to the other three?), Goldfinger was shown in cinemas for the first time and the house of commons voted to abolish the death penalty for murder.

It was also a good year for music, with the stars of the day still managing to dress smartly - with well pressed suits and good manners (well, for the cameras anyway - I'm sure some of their egos were just as big back then as they are now) and there's a good collection on show here. Even the surprisingly bright and jolly looking Jimmy Saville is on hand to introduce the various groups with various quips and quotes of the day. Were you a child of the sixties? If so, you're sure to find a song or two on here to jolt a memory or two. That is, of course, assuming you weren't smoking some products that you really shouldn't have been.

Given the age of the programme the picture quality is surprisingly good. Sure, the print isn't the best you're going to see, but the colours are rich and vibrant with a good level of detail. Pixelisation and grain is a major problem throughout, but if you're on a nostalgia trip then it's not even worth worrying about. If you thought some of your shirts were a little on the bright side then you should really take a look at a few of them on show here still. Funny thing really, they're all probably back in fashion too!

Given the age of the material on offer the Dolby Digital 224 Kbps soundtrack is surprisingly good and involving enough to sing a long too. Sure, there's not going to be any amazing DTS soundtrack found here, but then again, when did your Beatles album suddenly start shaking the room with amazing 5.1 effects? Nope, the audio track more than meets its needs and, if anything, it completely exceeded my expectations. Still, anything too fancy then it would have really detracted from the original ambience of that Mersey beat. Ordinarily I would suggest discarding the surround system for a soundtrack such as this, but in the the case of Pop Gear, then you should definitely crank up the volume and enjoy - and that's from someone who wasn't even born in the 60s!

The menu is a static but scored affair. Each track can be individually selected from the Scenes menu whilst if you're feeling particularly nostalgic then the entire programme can be watched in one sitting. There's no extras as such, although the Beatles do make an appearance in the Pre-credits with She Loves You and again in the End Credits with Twist and Shout. Needless to say, they are accompanied by hundreds of screaming and crying women - something you'd never get at a Megadeath concert! The addition of the Beatles clips do have a faint whiff of padding to them, but I'm sure many a Beatles fan will be chuffed with their inclusion.

This is a cracking DVD and well worth a watch. If you were growing up in the sixties then they'll be plenty of bands and tunes on show to get you out of your chair and dancing around. However, this reviewer decided to show a parent the disc for their opinion and then had to endure an hour of reminiscing and being told about their teenage life. Still, their tales of the stars of the era, their antics and rather heavy smoking was interesting to listen to.

If you thought the tellybubbies were the perfect material to keep the kids quiet then Pop Gear is the absolutely perfect material for keeping the parents quiet too - well, OK, they have a tendency to start singing along too. Still, just for that, it gets bonus marks and a highly recommended! Now, where did I put those flares and flowery t-shirt?