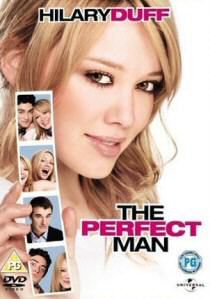 Every time Jean Hamilton's heart is broken, she uproots daughters Holly and her sister Zoe to another US state to escape and start afresh. So when yet another break-up occurs, they gather up their belongings and all move to Brooklyn in New York so that Jean can take up a job as a cake decorator. It doesn't take Holly long to fall in love with the city and make some great new friends. But not wanting to leave yet another city she comes up with the perfect plan for the perfect man for her mum by inventing a secret admirer who leaves flowers at her door and only communicates via e-mail.

However, she needs some inspiration for the romantic notes and emails so she enlists her friend Amy's charming and handsome Uncle Ben who owns and runs the River Bistro restaurant. However, Ben doesn't know that his romantic thoughts and ideas are being used as part of her plan. In fact, he simply thinks its part of her English project and he's happy to help. Although the plan starts off well, Holly's secret admirer scheme soon begins to fall apart when Jean becomes romantically entwined with her well-meaning, but rather hapless, bakery co-worker Lenny.

Holly soon realises that it will take more than e-mails, notes and gifts to keep her mum distracted so she has no other choice but to produce a suitor. So who better than putting a face to all the romance by using the one and only Uncle Ben. So Holly finds herself resorting to increasingly desperate measures in order to keep the ruse alive and protect her mum's newfound happiness. But in the process, Holly almost misses her perfect man.

The picture is bright and colourful with a reasonably high level of detail throughout. However, these colours can be a little too rich at times as there's the occasional bout of colour bleeding, mainly from the reds, whilst grain is also a bit of annoyance in what is a fairly good quality transfer. Black levels are good and solid with the night time scenes managing to portray just that, whilst given that it's such a recent theatrical release the print is clean and free from signs of print damage or other picture imperfections. Ok, so it's not the most spectacular picture out there in DVD land, but it's more than adequate.

The disc is accompanied by a reasonable sounding 384 Kbps Dolby Digital 5.1 soundtrack. The lower bit-rate is easily explained by the presence of an audio commentary track plus a Hungarian Dolby Digital 5.1 soundtrack (why region two discs always seem to come equipped with these is still a mystery to me). Whilst the film hardly cries out for anything spectacular in the effects department, the dialogue is crisp and clear in the centre channel whilst it's accompanied by some useful directional effects in the front stereo channels and a variety of effects in the rears. Given the genre and target audience of the film the soundtrack is surprisingly effective and a plus point for the film.

Once you get past the increasingly annoying anti-piracy trailer and the various copyright warnings, the main menu is animated and scored whilst there's some reasonable menu transition effects. However, the sub-menus are static and silent affairs with the extras laid out over a unnecessary number of menus, which yet again, will timeout and return you to the previous menu if you dwell on them too long. Extras wise, there's a surprisingly large number on offer, although I suspect that the large majority of them will be of no interest to the target audience. Never the less, they all do help add some value to the package.

The main extra on the disc is the extremely interesting Audio Commentary with director Mark Rosman and producer Adam Siegel. There's the usual backslapping comments and everyone is "wonderful", but there's plenty of information to be picked up on the production, including that the majority of the scenes were filmed in Canada, plus there's even a bit of CGI at work to make Toronto to look a bit more like New York. The commentary track is quite possibly better than the actual film, the only trouble is, I'm sure that it will be most likely overlooked by the majority of the target audience. Mind you, if you'd rather not listen to the commentary track then you can opt for the subtitle track instead.

Next up are the eighteen minutes worth of time coded Deleted Scenes. These scenes include an alternate opening whilst the remaining scenes have most likely been removed for pacing purposes. Whilst the audio commentary makes numerous references to these deleted scenes, there's no additional audio commentary to accompany them. It's all a little annoying as the main commentary will mention a deleted scene and then neglect to tell us why it was removed, and with no commentary here, you're left to your own devices to decide why. Following on are the five minutes worth of Outtakes. As usual, it's a collection of unfunny scenes of cast members adlibbing a little bit too much.

The rest of the extras are made up of short featurettes, with each one rather annoyingly prompting you for a subtitle and/or language option before starting. The five minute Mum and Me featurette has Hilary Duff and Heather Locklear talking about their on set relationship along with their own mother/daughter relationships. With plenty of clips from the film, an annoying musical score, plus on set antics and a comments from the director, it's the perfect amount of PR fluff to help promote the film. The seven minute Getting the Perfect Look featurette looks at the wardrobe, makeup and preparing for their roles. It's only something that'll interest the ladies (mind you, you can say that about the whole of the film).

The one minute The Clever Clapper featurette has Hilary Duff looking at the camera assistant who decorated the clapper boards to match each scene. Not the most exciting featurette you'll see, but at least somebody was enjoying their job. The four minute Ready, Set, Soak, Shoot! featurette looks at the restaurant flooding scene. The featurette examines the set and actor preparation right up to shooting the scene and the actual soaking (and where the stars only appear to be the ones who get fussed over and given a towel afterwards). The three minute The Sweet Arts : Creating the Cakes featurette looks at the waist busting cakes made for the film and meets up with Bonnie Gordon, the real cake decorator who made all of the cakes used in the film.

In an increasingly popular DVD extra, Hillary Duff is once again on hand to provide a video diary in the six minute On the Set With Hilary : Blogs and Buddies featurette. Mind you, she's obviously too important to hold the camera and it's left to the other cast members to film the proceedings whilst Hillary provides a bit of an audio commentary in the form of a blog entry. Following on from this is the four minute Hanging With Hillary featurette. I'd hardly call it "hanging" as it's simply a featurette made up of the cast members giving her a good old back slap, clips from the movie, oh, and a few interviews with Ms. Duff too. It's the same format with the four minute Hangin' With Heather and Chattin' With Chris featurettes, with the later being the more amusing of the set.

To say that The Perfect Man is a girlie film is a bit of an understatement, and it's probably not the best film in the world to be reviewed by an increasingly cynical thirty-something bloke who hates the majority of the romantic mush which is expelled by Hollywood. And rather unsurprisingly, it contains more of the sugary goo that makes women want to reach for the tissues, and blokes the vomit bucket. Mind you, at least Hillary Duff doesn't start singing the place down like she did in Raise Your Voice, although to be fair, I heard a record on the radio the other day and was quite happily tapping my feet to the tune only to learn it was from the one and only Ms. Duff. My therapy starts next week.

Whilst the ladies are sure to enjoy the film, and in between throwing up, those increasingly fidgety blokes sat next to them will most probably want to know why it's OK for someone to flood a restaurant, interrupt a wedding and attempt to break up a relationship in order to stop her mother from moving on yet again. Ok, so it's aimed at the younger teenage audience who'll be rooting for the goody-goody outcome, even so, buying or renting your lady friend this film will surely get you into their good books whilst you can escape to watch the football or latest action flick. See, even the gooey films have their advantages, but treat it like a Chinese firework. Light it and retreat swiftly and leave it for the experts to deal with.