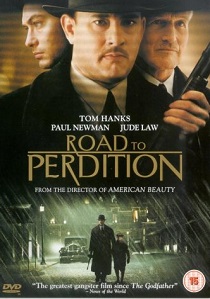 No one in the Sullivan family really questioned, nor knew, what Michael Sullivan actually did for a living. In a depression hit1930's America they were more than happy with everything they had, from their house in the suburbs to the meals placed on the table. Michael's job was no ordinary affair as he worked for the local Irish mob boss, John Rooney, as a hit man. He is the best in the business and he makes sure that this work never found its way into his private life.

However, that's all about to change when one night his curious twelve year old son, Michael Jr., hides in the back of his car and witnesses his father and Rooney's son, Connor, gun down three people. Shocked and startled he makes a run for it only to attract the attentions of the two gunmen. Fortunately, they realise just who the witness is before another person is sent to meet their maker.

But this young witness is causing problems for Connor who suspects that he could become a thorn in his side and reveal a secret about himself. There's only one solution - remove him and the rest of the Sullivan family from the equation starting with Michael's wife and youngest son. With the mob now on his tail, Michael and his son flee to Chicago in an attempt to seek help and shelter from another crime boss. However, Rooney is not going to make life easy for the Sullivan's so Michael is forced into a circle of retribution against his former colleagues and redemption with his son.

The picture is bright and vivid with masses amounts of detail. I wouldn't class it as being amongst the most colourful of pictures, but this is basically down to the thirties style cinematography and the fact that the majority of the film takes place in either dark locations or smoky interiors. It is this alone that makes the encoding process a real challenge as it could easily all just end up being a horrible mess. Fortunately, the bit-rate remains impressively high throughout the film and there are no signs of outlining, artifacting or dust scratches However, the picture is not totally perfect as during some of the scenes containing large expanses of land there was a noticeable graininess in the picture. Other than that minor quibble, it is a still good all round performance.

For what is a dialogue intensive film I was surprised with the quality of the surround and LFE channels whilst disappointed with the dialogue. The surround channels are used reasonably enough, but there are a plenty of occasions when they remain deadly silent. However, once the gunfire rings out it all bursts into life along with some excellent floor shuddering LFE's and even the musical score manages to rattle the pictures. However, with all this being pumped out, there are plenty of times when the dialogue becomes lost and inaudible in a sea of sound. You end up having to crank up the volume to hear the dialogue and then moments later diving for the remote as gunfire rings out. I was half expecting a smoke grenade and SWAT team to come crashing through the door at any moment. This is nearly an excellent soundtrack, and could be even better when you consider that a DTS version of the film is available on region one.

Twentieth Century Fox are usually renowned for their exiting and imaginative menu systems. Unfortunately, this memorandum must have got lost on the way to the DVD authors as what is presented here is decidedly average. Whilst the menu is scored and animated with scenes from the movie it is nothing really that special. Mind you, I don't suppose you can go too mad with the menu designs without giving away too much about the film.

There's a good set of extras on offer with the highlight being the audio commentary provided by director Sam Mendes. He also provides an optional commentary for the eleven deleted scenes, which again I wish director's would make seamless branching features so we can see for ourselves why, and whether, they should have been removed from the final cut of the film. Also included is the now near standard HBO making-of featurette which includes interesting interviews with the main characters. Things are rounded off with a decent photo gallery, biographies and production notes. Only the trailer for the CD soundtrack looks like filler material.

In all in this is a good gangster movie, and it makes a change to be cast back to the 1930's rather than the present. Fans of Tom Hanks are sure to be pleased with his appearance with the only downside being the ruthless nature of his character and the manner in which his victims are dispatched. It seems a little odd, but I got the impression that Hanks tries to make out he's really a good guy whilst going around killing people in cold blood. Has this film tarnished his good guy image? We'll have to see.

I also felt that the star of the show was not Hanks, but Jude Law. His career can surely only go from strength to strength with the gritty no-nonsense performance on show here. If you consider his recent roles in A.I. and The Talented Mr. Ripley, he's definitely a hot tip for future Oscar recognition. I don't think his had a stinker of a role yet.

Road to Perdition is certainly not going to surpass the likes of The Godfather and some of the praising quotes scattered around the press are certainly a little over flattering. Fortunately, I watched this film knowing very little about it and ended up being quite enjoyable, and a little predictable to say the least. However, for fans of Hanks and general gangster flick aficionados, it's still a film worth investigating.