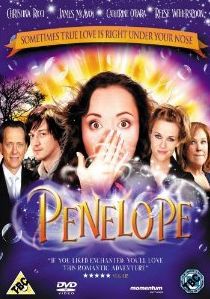 Penelope is a beautiful young girl with an extraordinary problem. Hidden away from the world in her family's majestic home, Penelope dreams of breaking free of a terrible curse that has been placed on her family when her great, great, great grandfather was prevented from marrying a servant girl - who, spurned by his rejection, jumped off a cliff. But all is not lost, as the family curse can be broken when Penelope finds true love. However, as with most curses, they are not the easiest of things to break.

Much as her wealthy parents try to help, true love is hard to find when every young, rich and suitable man runs, jumps and even throws himself through the window screaming as they attempt to escape from what they see. Even with a sizable dowry on offer from her parents, their attempts to find a suitable suitor seemed doomed to fail - even more so when their list of suitable bachelors is starting to run a little thin.

That is, until she meets Max, a down-on-his-luck musician and perpetual gambler of his family fortune plus Anne, a free-spirited rock-chick, who encourages her to come out of hiding and find her true self - warts and all. As Penelope ventures out into a world that she has been hidden from all of her life, she soon discovers that sometimes what you're looking for can be right under your nose - or should then be snout...?

As the film has no apparent time frame or location, the quality of the image is more or less open to the imagination of the viewer. With an amazing and mixed bag of colours throughout - from bright clothes and locations to bright and washed out interior scenes straight out of a Tim Burton movie, the high bit-rate transfer is superb. Also, given that this is such a recent theatrical release, the picture is free from any forms of print damage whilst pixelisation and outlining is none existent. Is this demonstration material? Well, perhaps only if you have a large number of children to keep occupied on a wet and windy Saturday afternoon birthday party.

Like the quality of the transfer, the 448 Kbps Dolby Digital 5.1 soundtrack is an impressive one. Reasonably busy in the surround department, with some clever ambient effects to keep your ears twitching, the dialogue is crystal clear in the centre channel whilst the front channels offer some excellent stereo steerage and assistance with dialogue duties. All in all, it's a great audio score that is only slightly let down by the lack of LFE effects - although, let's be honest, it's a film that hardly calls for such things.

Once you get past the advertisement for Revels (I do actually like the Coffee one!) you are greeted with a simple, but pleasantly animated and scored menu - even if the short audio score does start to get on your nerves after a few loops. Also, beware, if you didn't know what type of nose Penelope had before the film started, the menu cursor kind of gives it away!

Extras wise, contained on a static but scored menu, there's the Theatrical Trailer and a Photo Gallery - both being of little interest. However, the five minute Featurette offers a interesting, albeit rather brief, insight into the film. With plenty of clips from the film and interviews with the principle cast members and production crew, the storyline is discussed whilst the ever present prosthetic nose gets a mention too. The final extras on the disc requires your PC or MAC where the target audience can enjoy a Penelope Screensaver, a "Cut out and Keep" Penelope Mask and some Penelope Wallpapers. It's not exactly what you'd call an extensive range of extras, but at least they've made an effort.

Penelope is a great family film to sit and enjoy together. Whilst male adults might become a little bored, I spent most of my time preoccupied trying to work out just where the film was supposed to be based. Was it set in America or was it in England? Either way, it was filmed at Pinewood Studios in England, and it was a brilliant bit of cinematography that was straight from Tim Burton's modern, and equally wonderful, fairytale Edward Sissorhands.

Whilst the extras are a little lightweight, the overall enjoyment of the film and the fact it is totally inoffensive to the viewer makes this the perfect disc to own. Like most films and/or fairy tales, there's a message, and in this instance it's about the importance of inner beauty and self confidence. And in today's world of instant gratification, me first attitudes and size zero models, it's definitely a message that is worthwhile listening to.