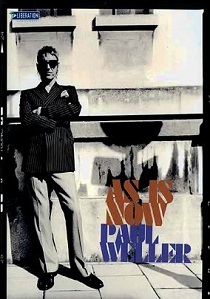 The performance highlights are taken from the 100 Club in London in September 2005, where he played to a lucky audience of only 150. A venue he has not played since his post Jam days in 1984. He is backed by Steve Cradock on Guitar, Damon Minchella (both of Ocean Colour Scene) and Steve White on Drums.

You get more of that live performance feeling of being there than with a lot of live DVDs, especially when shots are shown from the back with a pillar in the way of the stage. This is understandable as the gig was for a lucky 150 people so it not going to be a stadium type production. To be honest this suits me fine as I cannot be doing with stadium gigs. Give me a small venue anytime. Much more personal, real and sometimes a bit raw. He kicks off proceedings with a great performance of From The Floorboards Up, to get the crowd suitably fired up for the rest of the night, finishing with a great nod back to his Jam days with A Town Called Malice.

There's a definite home video recording feel to the concert footage - not that that is a bad thing mind. The all important stage is brightly lit with a vast range of colours and the overall picture reproduction is surprisingly good. Concert footage is notoriously hard to give a true reflection of the transfer quality, but on the whole transfer is clean whilst the picture has a good level of detail and a high bit-rate throughout. However, during some of the wider shots grain can be a bit of a problem and there is a small amount of digital artifacting, although this is not to be that unexpected with concert lighting arrangements such as these.

The concert is available with 224 Kbps Dolby Digital 2.0 or 448 Kbps Dolby Digital 5.1 soundtracks. The stereo soundtrack is the default so, if you're going to listen to the concert via your surround system, you'll need to manually select the 5.1 soundtrack. Audio quality wise, and given the small size of the concert venue, the 2.0 soundtrack is more than adequate and great for anyone who doesn't own a surround system. However, the 5.1 mix reveals a much more spacious soundstage with all of the channels used to some degree. The bulk of the audio is naturally directed through the centre and front channels, whilst the rear channels tend to contain the cheers from the audience - although there is a slight intrusion from the musical instruments. The LFE channel isn't forgotten either with the strumming bass sat there quite happily throughout the concert.

As the disc review here was a preview disc the disc only contained a temporary menu which wouldn't reflect the final product. As a result the menu simply allowed the selection of the concert or the extras. Extras wise, it's a good collection and fans of Paul Weller are going to be extremely happy with the content.

The forty-six Minute documentary is done in one those styles I find really annoying. Quick edits of studio performances with numerous talking head slots of Paul et al that have been 'adjusted' for reasons known only to the makers. There were of course the now obligatory grainy cine film type shots when showing the cutaway shots, which I find a bit clichéd. At times I did not know who was saying what as the voice in question was not always shown with a 'talking head'. I would imagine that the majority of the buyers and followers of Paul Weller are not MTV drones and can do without the 'arty' editing and the frame speed adjusting of those being interviewed. When I see this I do not think, that's really great and creative it just seems like trying not too hard and putting it in because we can and everyone else does it. Please leave that for the short attention span MTV crowd.

The interview on the extras is a simple interviewer and subject affair. You will spot the parts seen in the documentary but without the annoying effects and is a much better viewing experience for it. The are five full studio tracks taken straight from the recording sessions and an interview with Paul and Jan 'Stan' Kybert plus four minutes of fans comments on the talented Mr. Weller and some still pictures too.

Paul Weller has amassed quite a following over the years from his time with The Jam up to his solo work of today. He also lost some with his Style Council material and the long forgotten (thankfully) Red Wedge collaboration. I was only nine when The Jam was first played on the radio and fourteen when Weller broke the band up. I listen to The Jam now and they still sound great, that is credit to Weller's writing and, although I do not claim to be a huge fan of his solo work (although Broken Stones is one of my favourites songs), I can see why he still has a large loyal following and long may he carry on.

A DVD of a live performance is never going to compare to actually being there, but performances like this should make people want to go out and see how a proper band look and sound.