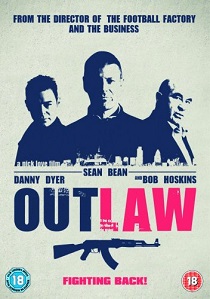 ReviewThrillerCrimeAdventure
Review Article Go back to homepage
Failed by the courts and the police, a group of disillusioned citizens decide to organise and take the law into their own hands.
Sean Bean, Danny Dyer, Lennie James, Rupert Friend, Sean Harris, Bob Hoskins
Crime, Action/Adventure, Suspense/Thriller
2
1 Hour 41 Minutes
Thank you for supporting DVD365.net when you order using the link(s) below.
Buy DVD
Story

For all of his swagger and money, share dealer Gene Dekker is living in fear of a workplace bully and threatening youths, Cedric Munroe is a successful barrister whose beautiful wife and unborn child have just been murdered by the henchmen of a crime lord he is prosecuting, Sandy has been disfigured and mentally scared in an unprovoked attack whilst Simon Hillier, thrown out of the T.A. and rejected by the army, is a hotel security guard who has witnessed the darker and seedier side of life through his CCTV network.

When Danny Bryant, a war-veteran, returns from Iraq he finds the country he has so proudly served in a state of disarray. Not only has he been dumped by his wife, but violent crime is rife and the government is failing to control it. Whilst staying in a block of apartments monitored by Hillier, Hillier introduces him to Gene, Cedric, and Sandy. It's at that point that Danny becomes disgusted with the state of country and with the help of Walter Lewis, a disheartened cop who is fed of up fighting criminals who always escape prosecution, they form a modern-day outlaw posse.

When Walter reveals the identity of the crime lord responsible for murdering Cedric's wife and unborn child, the gang begin working their way through the criminal underworld in search of revenge. As their confidence and level of violence escalates, it doesn't take long before cracks start to appear in the gang. And when their attacks result in murder and robbery they end up having both the police and the underworld on their tail. However, the question is, just who are the bad guys?

The picture is a bit strange one - not for the quality of the image, which is rather good, but for the manner in which is was filmed. Whilst it seems to have lost some of its edge on the small screen, the rather jerky camera movements on the big screen must have been really difficult to watch and, at times, it was almost headache inducing. Whilst I'm sure director Nick Love wanted to get you right into the middle of the action, there was definitely a point when it became a little too much.

Still, putting the shaking cameraman to one side for a moment, the rather dark and gloomy images were handled surprisingly well. Whilst the colours were deliberately toned down, images are sharp and well detailed with very little artifacting or outlining. The only real issue I noticed was with grain, but the low budget and resultant cheaper cameras and film stock assisted in this. Still, at least it proves that it's no longer necessary to spend a fortune on camera equipment to get a half decent transfer. It's just a pity about that drunken cameraman.

Given that the film is primarily dialogue based there is very little need for anything too dynamic in the sound department. Never the less, the 448Kbps Dolby Digital 5.1 soundtrack does a very good job indeed with some clear and precise dialogue in the centre and front channels whilst the surround channels are kept fully occupied by the musical score, thumping techno, gun fire and plenty of ambient effects. Considering that this was a low budget affair, the post production crew did a cracking job in producing a soundtrack worthy of a film with a much higher budget than this.

The menu system is scored and cleverly animated in a 3D scheme with various clips from the movie playing in the background. Select a menu option and the screen rotates around before displaying the selected menu. The plentiful supply of extras are housed in their own section with two pages of static and silent menus.

The main, but not necessarily the best, extra is the Audio Commentary with Nick Hove and Danny Dyer. With plenty of swearing and general ranting and raving about the state of the country and our political masters, this yack track soon started to get rather boring. Unfortunately, this is not the sort of audio commentary to gleam too much production information from - although if you're willing to sit through the ranting I'm sure there's some in there somewhere. The sixteen minute Big Hitters Diary featurette follows a group of people who signed up to the film from the official website. By putting, and risking, their own cash into the film they became "a big hitter" and part of the cast, executive producers and having their names added to the end credits of the film. It wasn't quite on the scale of Lord of the Rings, but it's certainly a good way to go in order to get funding for a film.

The twelve minute Rave and the Riot featurette is introduced by the director and contains an additional running commentary. As to be expected with Nick Hove and Danny Dyer, there's plenty of swearing from just about every man and his dog. The featurette contains plenty of behinds the scenes footage of the rave and the resulting riot before the deleted scene in its entirety. Whilst the director explains why the scene was ultimately deleted - essentially because it looked too much like Football Factory - it should have been kept in to help keep the story fluid. The fourteen minutes Outlaw Video Diaries is a collection of clips and featurettes from the original website. Again accompanied with much swearing of every flavour, plus the usual collection of back slapping praise for everybody, the featurette contains plenty of general chit-chat from the director and cast members about the other cast members and the never ending increase in crime for the disturbing ideas behind the film. It also manages to provide some surprisingly interesting information on the costumes and the various weapons used in the film.

Running for nine minutes, the eight Deleted Scenes are all high quality images and can either be selected individually or played in one go. Whilst one or two of the scenes were a little slow and didn't really add much to the storyline, a couple of the scenes where the group attack a gang of teenagers and a copy-cat crime is reported on television were, in my opinion at least, a fairly fundamental part of the film and should have been kept in. Running for thirty minutes, The Making of Outlaw contains plenty of behind the scenes footage and interviews with the cast and crew. Whilst it starts off as yet another, and already included in the other featurettes, rant against the system it provides plenty of back ground to the film. Mind you, as with the rest of the footage, there's plenty of swearing and general on set messing about. Who said that acting was a difficult job?

Things are rounded off with the Theatrical Trailer. All in all, not a bad set of extras that add some good value to the overall package. It's just a pity that Nick Love decided to trim the Rave and the Riot scene from the film as it would have made a lot more sense to the viewer by being in the film in the first place. Still, I guess the already reasonably long running time had an effect on this and this was the easiest bit of the film to trim.

Like the film, this review could quickly turn into a political rant against the failings of an incumbent government that appears to be in a human rights mess of its own making. Outlaw does start off with a message - that in Blair's (and now his cohort Brown) Britain, criminals are getting off too far lightly, with some serving prison sentences less than the time their unfortunate victims spend in hospital, before it spirals downwards into a rather flawed, bloody and confusing mess. The heart of the message remains, but it just looses itself with a chaotic ending that simply looks like it was made up as they went along - that or the production budget ran out.

There will be many people from all walks of life that support the idea behind the film, and let's fact it, there is the very real threat in Britain that - devoid of any police protection or action from the courts - vigilantes will start to roam the streets and dish out their own brand of justice. Never the less, the graphic violence and the gangs apparent desire to "sort out" religious minorities and child molesters made for some uncomfortable viewing, that and the fact that it suddenly seemed to loose whatever plot it originally had. Outlaw certainly tries to ask a lot of questions, but it then completely fails to answer any of them, leaving the viewer rather disappointed.

With the likes of Bob Hoskins and Sean Bean giving their usual gritty performances, this is no remake of the far superior Deathwish franchise. Alas, Outlaw is not likely to be the sort of film you'd consider dashing out to buy (and be prepared to see some heavy price reductions in the not too distant future) but it's definitely worth while considering as a rental - even out of curiosity. That or wait, with much fanfare, for the inevitable screening on your local satellite movie channel. It's a shame really as, along the England football team, it's a film that had so much potential but failed to deliver where it really counted.