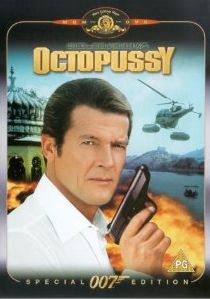 ReviewCrimeAdventure
Review Article Go back to homepage
When a Faberge Egg is found with a murdered British agent, Bond on soon on a trail which leads to India and a deeper plot to kill thousands of people in Europe
Roger Moore, Maud Adams, Louis Jourdan, Kristina Wayborn, Kabir Bedi, Steven Berkoff, Desmond Llewelyn, Robert Brown, Vijay Amritraj
Action/Adventure, Crime
2
2 Hours 5 Minutes
Thank you for supporting DVD365.net when you order using the link(s) below.
Buy DVD
Story

When a British agent, dressed as a clown, crashes through the window at a British embassy party in German holding a Faberge egg, the British become suspicious and send James Bond to investigate an apparent smuggling operation. However, the Faberge egg turns out to be a fake and when the real egg comes up for auction in London Bond becomes suspicious and decides to investigate further.

Bond attends the auction and manages to swap the genuine egg for the fake which is then bought by a rich exiled Indian Prince, Kamal Khan. Bond then travels to India where he tempts Khan with the genuine egg. When Bond is invited to his palace he discovers that a Russian general, Orlov, is involved in the smuggling ring and that his operation has a more sinister motive.

The picture is bright and colourful with a high bit-rate throughout the film with no signs of artifacting or outlining. The bright and sunny outdoor scenes in India are wonderfully defined and along with the vast arrays of colours in the street scenes make it a cracking film to watch.

However, the most disappointing part of the film is the sound. After a number of cracking Dolby Digital soundtracks it is very disheartening to see another Bond film with just a stereo soundtrack, and very uninspiring it is to. Surely MGM could have attempted to re-master the soundtrack.

Again, although the documentary is of the usual high standard, I got the impression that the extras were hastily put together. However, on the plus side, John Glens Audio Commentary is still interesting and informative, especially during the scenes in India. There's even an extremely grainy and awful music video for the Bond theme song, best to avoid that one.

Although the film is not one of the best Bond films it still reasonability enjoyable with plenty of half dressed women and an extended appearance of Q. However, it does have one of the best opening sequences with Bond flying a miniature jet aircraft hotly perused by a ground to air missile - now that would have been so good to hear in Dolby Digital.

Special Features
Related Articles
The Tourist, London Heist, North v South, Rise Of The Footsoldier 2, Children of Dune, The Girl with the Dragon Tattoo, Shadow of the Sword, The Tourist, Fanged Up, Beverly Hills Cop, The Krays: Limited Edition
Tower Of London, A View to a Kill, The Living Daylights
Rollerball, Everything Or Nothing: The Untold Story Of 007, The Man with the Golden Gun
The Wild Geese, The Wild Geese: Special Edition, A View to a Kill, For Your Eyes Only, Live and Let Die, The Man with the Golden Gun, Moonraker, The Spy Who Loved Me, The Quest
A View to a Kill, Diamonds are Forever, For Your Eyes Only, Goldeneye, License to Kill, The Living Daylights, The Man with the Golden Gun, Moonraker, On Her Majesty's Secret Service, The Spy Who Loved Me, Thunderball, Tomorrow Never Dies, The World is not Enough, You Only Live Live Twice
Comments
RecommendedView