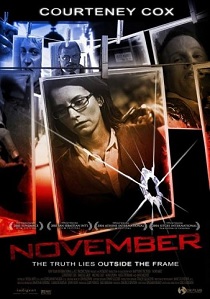 After a pleasant dinner out, photographer Sophie Jacobs and her boyfriend Hugh stop at a corner store for a late night snack. After all, it was a Chinese meal and you always end up with the munchies half and hour after eating. But whilst Sophie patiently waits in the car she is unaware that, along with the shops other customers and owner, Hugh has been murdered in a violent store robbery.

Haunted by guilt, Sophie attempts to get on with her life as best she can by teaching photography at a local art college and meeting her mother for lunch. The only real change to her lifestyle is her weekly visits to a therapist. But one day at college, a disturbing slide mysteriously appears in the projector's carousel. It's an image of what looks like her car in front of the corner store the night of the shootings. Naturally, she is quite shocked by the images and she contacts the police. Whilst sympathetic to her cause, they can shine no further light on the subject.

Deciding to do some of her own investigations she starts to encounter more strange events and coincidences that ultimately start to question exactly what happened on the night of Hugh's death. As Sophie struggles with her memory of that night her life begins to change, leaving her totally clueless as to what's coming. But worst of all, the line between reality and fantasy is beginning to shatter. Is it the truth or is the medication having an adverse effect on her mental state?

Colour plays a very important part in the film and the picture has a near continuous blue tinge to it. As a result, it played hell with my plasma television and the picture suffered from huge amounts of grain, outlining and a picture that was so dark at times it was hard to make out just what was going on. Even my PC based DVD player wasn't particularly happy with the picture and decided it would be better to show large amounts of artifacting. However, this was probably influenced greatly by the fact that the limited budget played a large part in the quality of the transfer. Never the less, it wasn't really helped by the director's bizarre camera angles and subdued to equally over the top lighting effects. Talk about a DVD challenge. Still, at least the transfer was clean and free from print damage.

Rather annoyingly, the default soundtrack is the192 Kbps Dolby Digital 2.0 rather than the expected 448 Kbps Dolby Digital 5.1 version. It's only once you investigate the back of the DVD case (or sound set-up menu) that you discover that there is a enhanced sound track (it also reports it as being region 0, but my PC identified it as being region 2 only). Still, it doesn't matter too much, as after watching nearly half of the film in 2.0 I was quite impressed with what my surround system in Pro-Logic mode was making of the rear effects. Never the less, once I discovered the 5.1 track the surround channel burst into life and provided plenty of distorted and weird ambient sounds that accompanied the various flashing and distorted on screen images. The front and centre channels also offered some good stereo steerage and some clear and precise dialogue. Impressive stuff (eventually).

The main menu is nicely scored and animated with various cut scenes and dramatic sounds from the film. There's also some nice transition effects whilst each submenu is scored. It all looks very professional and something more becoming of a much higher budget film.

Unfortunately, that's where all the excitement ends as the only extra included is the Theatrical Trailer. Ordinarily, this wouldn't annoy me too much, after all it's a film made on a minuscule budget, but it becomes all the more galling when you investigate its region one counterpart and discover that it's equipped with two Audio Commentaries, an Alternate Opening and Photograph Gallery. And there's me worrying about only having that trailer.

When the cover artwork of a film you've never heard of boasts that it was nominated for various awards and a winner at the Sundance Festival you have to wonder just what you're letting yourself in for. And when you do a bit more digging and discover that the film had a merge $300,000 budget it starts to bring you out in hives at the thought of reviewing it. Never the less, one of the few bonuses of being an on-line DVD reviewer that PR companies actually want to send preview discs to, is that every now and again you come across a bit of a gem and goes on to prove that the smaller independent labels and directors can produce the goods whilst Hollywood appears to have lost its way.

Never the less, given that Courteney Cox is use to bigger budget productions and pulled in earnings of $1 million dollars per episode of Friends, you have to wonder about her dedication to the production with big star demands and a trailer the size of Belgium. But, by all accounts, this wasn't the case and she really mucked in and even performed some of her own stunts. After all, if Jennifer Anniston can do it in The Good Girl then why can't Courtney Cox? As a result, it all pays off rather handsomely and November should be a bit of a sleeper hit on DVD.

But without going and spoiling the plot, the film has been done before and upon seeing the format and flow of the film it soon became apparent what the film was trying to portray. As a result, it all became a little predictable. Still, don't let this put you off as with so many clues along the way, November is the sort of film that is going to warrant repeat viewings.

If you like your thrillers and a bit of thinker then you'll find that November fits the bill perfectly and, as 3000 Miles From Graceland proved, Courteney Cox doesn't need to resort of comedy to prove that she can act. Highly recommended, although the region one edition with its Audio Commentaries may be the more attractive proposition.

Special Features
Related Articles
The Hero, My Life As A Courgette, The Founder, Fargo: Year 2, A Walk In The Woods, Me And Earl And The Dying Girl, Paradise, We're The Millers, The Kings of Summer, Smashed, Bad Times At The El Royale, The Lego Movie 2: The Second Part
Paradise Alley, Raise the Titanic, Patriot Games
The Perfect Guy, Think Like A Man Too, About Last Night, Think Like A Man, Underworld Awakening, Takers, 2 Fast 2 Furious
Friends: The Complete Series, Who Do You Think You Are? Series 1 -7 and USA, Barnyard, 3000 Miles to Graceland, Scream, Scream 2
The Banger Sisters
The Darwin Awards, Three Kings
Comments
DVD Releases News Pick

DVD
Get lit in the stylish ensemble caper, The Gentlemen, a star-studded, sophisticated action-comedy written and directed by Guy Ritchie, released on DVD, Blu-ray and 4K UHD 27th April 2020 from ... END_OF_DOCUMENT_TOKEN_TO_BE_REPLACED
Latest ReviewsView