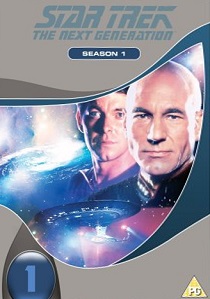 Star Trek: The Next Generation - Season 1

Seventy eight years after James T. Kirk captained the famous Starship Enterprise, a new captain and crew board the Enterprise NCC 1701-D to continue its mission to seek out new life and new civilisations. Launched in 2363, it is the fifth Federation starship to bear the name Enterprise. Twice as big as the original, the 'Galaxy-class' Enterprise-D carries seven times as many crew and has a vast array of armaments. As they explore the galaxy they will encounter both friendly and hostile aliens testing both Captain, crew and the human race to the fullest.

Captain Jean-Luc Picard is arguably Starfleet's finest captain of the 2360's. An intelligent and skilled negotiator and tough opponent in battle, he is dedicated to his ship, crew and the prime directive. Commander William Riker provides alternative opinions for the Captain. He challenges some of the Captain's decisions and offers alternatives. Riker leads most of the away teams whilst the Captain remains onboard the Enterprise.

Lieutenant Commander Data is a unique super-intelligent android who was created by Dr. Noonien Soong. Data was designed to be as human as possible, but no matter how powerful and complex his positronic brain is, Data is unable to comprehend emotion. Commander Deanna Troi is this ship's counsellor. Troi has the ability to feel the emotions of the people around her, making her opinions extremely important during sensitive negotiations and stand-offs.

Lieutenant Worf is the son of a disgraced and murdered Klingon warrior. Worf was raised by humans and became the first Klingon to serve in Starfleet. Worf brings a warrior's astuteness to the bridge of the Enterprise. Lieutenant Commander Geordi La-Forge was born blind but was given sight through a specially devised visor. Geordi is an excellent starship engineer who keeps the Enterprise's systems running smoothly and is ready for any eventuality.

The picture is rather disappointing, but for a television series it is not too unusual to see and I wasn't expecting anything mind blowing. The NTSC to PAL conversion has resulted in a picture that is soft with too much contrast and lack of colour. However, I suspect that the state of the original picture stock played a major part in the final picture quality. Never the less, it is still superior to what ever video could have offered.

The menu system is certainly in the style of Star Trek with fonts and displays in the style of the computer control system on board the Enterprise. The main menu is scored with the theme music and there's a few cut scenes from the discs episodes playing in the corner of the screen along with a rotating schematic of the Enterprise. Once an episode has been selected a similarly designed, but static, menu appears offering the various language options and chapter selections in the usual Star Trek jargon. The menu is also accompanied by a computer bleeping sound that soon becomes extremely annoying.

The disc set is presented in an excellent, but rather flimsy, paper foldout set with some great artwork. However, there seems to have been a hastily added sticker to the back of the sleeve acknowledging the use of some star trek artwork. If the paper case is weak and prone to falling apart then Paramount have place the whole lot in a gray plastic box. It will certainly give you a distinctive collection on your bookshelf.

Although not extras, each episode is also accompanied by multi-language subtitles and audio soundtracks. The first seasons episodes are contained on seven discs with the seventh containing an hour long special split into a number of interesting sections with interviews with the cast and crew, the costumes and special effects. It's a Trekkies dream come true!

If you already own the vast number of videos that make up the seven seasons it would be hard to recommend buying this box-set. However, if you already own them all then you're bound to be a Trekkie who'll buy the DVD set anyway. You'll certainly need to find time to watch the in excess of eleven hours of programming otherwise you'll be struggling to finish the set before the next one comes along.

It is certainly not a cheap way of starting a collection, especially if you're already collecting the X-files or Buffy sets, but there's no better time to start. If you leave it too late then you'll be buying these box-sets forever, and once Deep Space Nine, Voyager and the new Enterprise series make their way onto DVD you'll be needing to re-mortgage the house just to buy them.

It may not be the best season with some awful acting, dodgy polystyrene sets, iffy special effects and some mind numbingly boring episodes, but the legend had to re-start somewhere. Putting those criticisms aside, there's still some good episodes and it certainly sets the scene for all of the next seasons and other programme spin offs. It really depends on whether you want to pay the sort of money demanded for this, and the six other, box-sets.