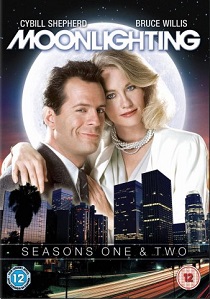 ReviewComedyDramaRomanceCrimeBruce WillisCybill Shepherd
Review Article Go back to homepage
After her accountant ran off with her money, ex-model Maddie Hayes is left with a detective agency run by charming loudmouth David Addison. When her attempt to shut the agency fails, the unconventional pair end up solving crime.
Cybill Shepherd, Bruce Willis, Allyce Beasley
Drama, Romance, Crime, Comedy
2
19 Hours 12 Minutes
Thank you for supporting DVD365.net when you order using the link(s) below.
Buy DVD
Story

Beautiful ex-model, and the face of Blue Moon Shampoo, Maddie Hayes has - or did - have it all. That was until she was betrayed by her investment adviser who upped sticks and fled with all of her money. Now all she has left is her house, her beauty and a number of hopeless businesses that are used as tax write-offs. So, in an attempt to salvage some money she decides to close them all down - that is until she finally comes to a run-down detective agency called "City Angels" run by the charming, but rather loudmouth and chauvinistic, detective David Addison.

>However, unlike her other failed businesses on her portfolio, David is in no mood to return his two company Porsche cars or let his detective agency be closed down - especially since he claims to be such a good detective. But Maddie is determined to close the agency down - that is until she witnesses a murder and, sensing an opportunity to get her on board and form a partnership, David decides to solve the case of a broken watch and a haul of Nazi diamonds. So with the bodies piling up on a daily basis, and the mystery deepening by the hour, is it a case too far for (the newly renamed) "Moonlight Detective Agency"? Sounds like there's going to be plenty of quirky cases, mysteries and sexual tension.

For a series that is over twenty-years old, the picture quality of Moonlighting is not one of the best you're going to find on DVD. Although the series came from a time when video was king and the thought of anything high-definition was just a pipe dream, I'm still sure Sony could have done something to tidy up the image quality here. Never the less, whilst the picture suffers from the usual NTSC transfer issues of too much contrast and flesh tones that are more red than they are pink, the picture quality isn't unwatchable and there's sufficient detail in the image to allow it to be viewed on a large screen television. Sure, there can be a fair amount of print damage, and grain can be an issue, but the quality of the transfer is probably the best we're ever going to get.

Like the picture, the Dolby Digital 192 Kbps 2.0 soundtrack is nothing special and it's possible to turn off your surround system and crank up the television volume instead. Mind you, since the series was originally broadcast in mono the dialogue can be a little muffled and confused at times. However, by using the surround system to process and separate out the front channels, it can help improve matters dramatically - including the many 80s musical tracks (not forgetting the show's catchy theme song which went on to become a hit for popular jazz singer Al Jarreau).

With a television to DVD release such as this, and an old one at that, it would be quite easy to provide a vanilla and boring disc of little interest to anybody but the fans. However, the six discs in this two series set contain animated and scored menus. Sure, they're not going to win any awards for their presentation, but at least a little bit of effort has been put into the release. Whilst there are a number of extras to be found on the sixth disc, the DVD is missing the Audio Commentaries found on the American release. Unfortunately, in order to accommodate numerous subtitles and Spanish and Italian audio tracks, it looks like there was insufficient space left for the yack tracks.

Extras wise, the three featurettes offer an interesting insight into the series and its background. With numerous interviews with actors Bruce Willis, Cybill Shepherd and Allyce Beasley, series creator Glenn Gordon Caron and other production crew members, there's plenty of information to be extracted. Running for fifteen minutes, and with plenty of clips from the show for good measure, Not Just a Day Job - The Story of Moonlighting looks at the origins of the series (including a brief clip of Bruce's screen test) whilst the fifteen minute Inside the Blue Moon Detective Agency continues to look at the series and the friction between the writers and network. If anything, both featurettes show just how surprised everyone was with the success of the series and just how they managed to keep the networks happy is all the more remarkable.

Finally, the twelve minute The Moonlighting Phenomenon featurette does exactly what it says on the tin with a look back at the news headlines for the series and some interviews fans of the series. Again, with plenty of clips from the series the only thing missing (again, available on the region one version) are some Deleted Scenes and Outtakes (I'm sure they'd be good!). However, rather bizarrely, whilst all of these featurettes have subtitles, there are no English subtitle tracks available.

Created for television by Remington Steele and Medium creator Glenn Gordon Caron, Moonlighting was a phenomenal 80s success. Starting at a slow and more serious pace - with only six episodes in the first series - it quickly gathered a huge fan base with rave reviews too. With some imaginative script writers who were prepared to defy the network, Moonlighting became a ground breaking series that managed to fuse drama and comedy with, as the series matured, a screwball element, numerous references to the scriptwriters, the audience, the network or the series itself. They even managed to brake the "forth wall" by turning to camera and making some clever quip to the audience. There was even time for a black and white episode - introduced by the one and only Orson Welles how died not long after filming. Moonlighting also never forgot it was a television show - and it was prepared to prove it.

Bruce Willis and Cybill Shepherd were the perfect people for their respective roles and the sexual chemistry sizzled on a weekly basis. People tuned in to see their chemistry and mad-cap actions, but with their popularity growing exponentially it was only a matter of time before Hollywood came calling - with Bruce Willis heading off for film roles including a rather unknown and underrated film called Die Hard whilst Shepherd found subsequent small screen success with Cybill. However, when the chemistry and the "will they, won't they kiss" perpetual storyline that also kept Friends going for so many seasons was finally broken, the fans didn't like it one bit! Needless to say, it didn't take long for the stars to become bigger than the show and, after four seasons, the Moonlight Detective Agency finally closed its doors (and I remember being mightily disappointed when it finished on BBC2)

By releasing Moonlighting in two parts, Sony gives a definite impression of using a fan base for a bit of a "cash in". However, with classic 80s comedy and a good collection of featurettes that will keep the fans happy (plus, if you shop around the Internet you'll find the boxset at a very inviting price) it's a boxset that is just too tempting to ignore. As such, Moonlighting is a classic 80s series that should grace every DVD collector's shelf. So, until the next boxset, buy, watch, laugh and enjoy. Highly recommended.