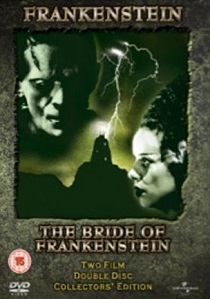 With a Transylvanian funeral in full flow and an emotional family mourning the loss of their loved one, they are all unaware that their sorrow is being observed from a distance as Dr. Henry Frankenstein and his hunchbacked assistant Fritz are eagerly awaiting the proceedings to be completed and the coffin buried. As once the grave is filled in the pair have plans to steal the newly buried corpse so Dr. Frankenstein can use the body parts in an experiment on the secrets of life.

With the grave diggers job finally complete the pair move in to exhume the corpse and return it to Frankenstein's castle. Passing the local hanging post, Dr. Frankenstein orders Fritz to to cut down the executed criminal so he can use the unfortunate victims brain. However, with neck of the victim broken, the brain is useless so an alternative must be found. As a result Dr. Frankenstein decides to send Fritz to his old medical school to steal one.

Arriving at the college Fritz peers through a window to see a dissection in progress and the doctor explaining to his students the difference between a normal and disturbed brain. Fritz decides that the glass jar containing normal brain will do the job just nicely so after the class is dismissed he enters the room to steal it. But in his haste to leave he inadvertently drops the glass jar on the floor and as not to disappoint his master he picks up the remaining glass jar. However, in an unfortunate twist of fate, Fritz has just picked up the glass jar labelled "Dysfunctio Cerebri - Abnormal Brain.". Oooh, isn't this going to be a fun experiment....

For a film which is over 70 years old the state of the print can be forgiven somewhat. And with these early films using highly flammable and unstable nitrate film it was lucky that this important classic was saved for prosperity. Some attempt has been made to restore the film but it still suffers from the usual problem of dust specks and light flashes which affect so many early films. The picture also suffers from problems with grain whilst the high bit-rate ensures there are no apparent problems with artifacting. Never the less, it is still perfectly acceptable for a film of its age and it all adds to its historical ambience. It certainly puts into perspective today's fancy special effects and CGI and I often wonder what things will be like in another 70 years. Will people be bemused at our ancient 2D colour filming techniques?

As with the picture, the sound can't be expected to go rattling the pictures off the wall and with a mono soundtrack there is little need for the surround system to be called into action. However, the dialogue is surprisingly clear with very little distortion. There's a near constant stream of crackles and pops but, again, for the age of the film it can be forgiven. Fortunately, there is very little in the way of a musical score so all you need to do is concentrate on the all important dialogue.

The menu system is pleasantly animated and scored. I was quite surprised by the menu system and was expecting some cheap and tacky black and white silent affair. Have Universal really gone to town on this release rather than making a quick dollar? Judging by the wonderful quality of the extras it certainly looks like the former with a disc which is packed to bursting with fascinating information.

The main extra is the new documentary The Frankenstein Files. With none of the original cast and crew left to interview it is down to film historians and relatives of cast members to provide all of the insights into this wonderful film. Running at nearly 50 minutes it explores the films historical background to the state of the art special effects and makeup used to create the monster we all know and love. It also looks at the many sequels and imitations, both serious and comedy, and this documentary alone makes this set a worth while purchase.

Also included in the extras is an equally interesting feature commentary from film historian Rudy Behlmer who talks energetically about the films background, the creation of a brand new genre and new Hollywood superstar Boris Karloff. And if his ramblings distract you too much from the onscreen goings on you can switch him off and read the accompanying subtitles instead. Again, this adds some tremendous value to what is already an excellent set of extras.

There's also a nice collection of wonderfully drawn lobby cards and photographic stills from the film and rather than the viewer having to flip through each still in turn it is presented as a montage. Finally, there is a strange American comedy short entitled "Boo". It is essentially a narration about ghosts and monsters which is set against scenes from Frankenstein and that other horror classic Nosferatu. The funny bone must have been made of different stuff in the 1930's as I didn't laugh once. Funny people these Americans.

There's no doubting that by today's horror standard Frankenstein can hardly be classed as a scary film. But in the depression of 1931 it was the height of shock. In fact, at the start of the film a man appears from behind a curtain and explains the films content before inviting any squeamish members of the audience to leave. Also, certain scenes in the film were regarded as being so shocking that in order to avoid cinemas full of fainting people, censors insisted that a number of scenes were cut. Mind you, I suppose if you take a big step back and consider what was available at the time you could probably see their point. Heaven knows what these same people would make of today's horror flicks.

Also available as part of the DVD collection are the equally classic The Wolf Man/Werewolf of London and Dracula/House of Dracula. And as with this collector's edition, they too are packed to the hilt with extras and Van Helsing trailers.