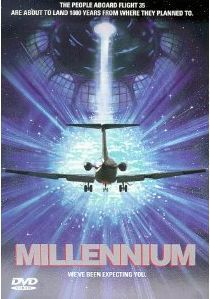 ReviewScience Fiction
Review Article Go back to homepage
The future earth is barren and humans are unable to reproduce. The only solution is to travel back in time and take people who won't be missed from their time such as air disaster victims.
Kris Kristofferson, Cheryl Ladd, Daniel J. Travanti, Sherman
Science Fiction
1
1 Hour 48 Minutes
Thank you for supporting DVD365.net when you order using the link(s) below.
Buy DVD
Story

Louise is part of a team who travels from the future to rescue people from doomed aircraft. She takes them to 1000 years in the future to replenish the dying human gene pool. However, during one such mission some equipment is left on a doomed aircraft and Bill, an air crash investigator, comes across it whilst inspecting the wreckage.

Arnold Mayer is a professor who is trying to prove that people visit from the future and when Bill makes his discovery, and the fact that the digital watches recovered from wreckage were running backwards, he gradually changes his opinions on Arnolds wild stories. His search for the truth soon becomes an obsession and Louise must now keep travelling back his past to retrieve the equipment and put things right to ensure no paradox occurs.

The sound is only average as it is only presented in pro-logic. The picture is also a mixed bunch, going from one extreme to another. It can go from being grainy to quite sharp. The picture has a fairly washed out look throughout the film. There are plenty of chapters and for a relatively early DVD has plenty of extras and a nicely animated set of menus. The only real let down here is the pro-logic sound.

The special effects are pretty laughable at times, especially with a so called stun gun from 1000 years in the future which was full of wires and flashing lights. It just looked like a cheap, made for television special and I kept expecting to see a certain Fox Mulder to appear at any moment to pass an opinion on the investigation.

The story line is brilliantly simple, effective and has plenty of scientific validity to it. When the stories repeat themselves they are seamlessly repeated and from the second 'angle' make perfect sense. The script carefully explains to the audience the effect of time travelling. It even has the cast members explaining it to each other, certainly useful when you start to become confused with all this time travelling malarkey and its consequences with paradoxes.