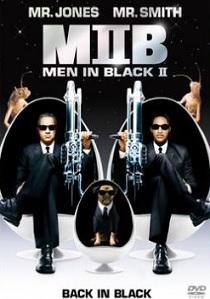 With Agent K returned to a civilian life Agent J is now the main agent at MIB and he's finding it hard to find a partner to match his high standards. With Zed starting to get fed up with having an endless stream of agents deneurolised, and the other agents wondering whether they'll be next, Zed decides to give him Frank. Unfortunately for J, Frank is an alien in the form of a talking dog and he's cramping his style.

When a mangled body is found in a park the agents are dispatched to the scene to check for any alien involvement. They soon discover that Serleena, who is an plant based shape shifting Kylothian, has arrived on the planet and disguised herself as a sexy lingerie model. She is on earth seeking the "Light of Zertha" and nothing, not even planets, are going to stand in her way until she has the ultimate power to rule the universe.

When Zed discovers that Serleena is on earth his realises that one only person can help locate what she desires. Unfortunately, that person is now has a new career at the post office and has no idea of his past exploits at MIB. Agent J is going to have to bring K back into the fold before Serleena finds what she is looking for and destroys the planet. Sounds like another day at the office.

As with the first film, the picture quality is of the highest order with a continuously high bit-rate throughout with no signs of any artifacting or outlining. The colours are bright and colourful with some superb definition and the multitude of blacks and gray scales are handled with ease. The picture transfer is also perfect with no signs of any dust scratches or other imperfections.

The only problem with such a good picture is that it really does show up some awful special effects. Whilst the majority are excellent, with Serleena's space craft and the MIB car being particularly impressive, Serleena's in her "natural" form with her many sprouting tentacles are just too obvious (if you can have such a thing in an alien!) and it really does cheapen the look of the film.

As with the release of Spider-Man, and the first Men in Black film, Danny Elfman has provided the musical score. However, unlike Spider-Man, this soundtrack does not overwhelm the sound stage and there's plenty of scope for good surround effects and some clear and easily audible dialogue in the front channels and some good wall shaking LFE's. It really is just what an action film should sound like.

The menu is brilliantly animated and scored with Agents K and J walking into the "Worm Guys" apartment. There you'll see Frank the dog and various Worms inviting you to make a menu selection. And once you do, the menu will zoom into the selection and offer another animated and scored menu. This really is a menu system at its best and a pat on the back must go to its designers.

Columbia Tri-star seem to have started something in the way they present the extras. Spider-Man has two discs and now Men in Black II also has two discs. Some may consider this a way of extracting additional funds from the customer, but never the less in both cases the extras are worth the extra outlay.

Similar to the Spider-Man release, at certain points during the film a MIB symbol will appear on the screen allowing access to a short featurette on a particular plot point or special effect. If you don't want to be disturbed by this feature, then don't worry as these featurettes are also available on the second disc along with a pile of other interesting extras. These include an amusing gag reel, Will Smith music video and a number of multi-angled scene deconstructions. However, the best extra has to be the superb computer animated short "The Chubb Chubbs" on the first disc.

The story has been cleverly crafted to bring the cast back together. Unfortunately it takes far too long to get going until Tommy Lee Jones is reintroduced and most of the best lines are stolen off Will Smith by a talking dog. It certainly shows how much of an important influence Tommy Lee Jones is and that Will Smith can't always carry a film by himself.

Whether this film will warrant repeat viewings is an interesting question, but that long list of worthy extras may just make it a tempting purchase after all. There's certainly enough to make you laugh, but it is missing that little something that makes a good film a great film.