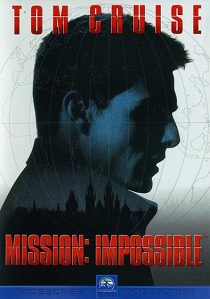 ReviewAdventure
Review Article Go back to homepage
The Mission: Impossible team are sent to Prague to retrieve the NOC-List, a list of names of western agents in the field.
Tom Cruise, John Voight, Emmanuelle Beart, Henry Czerny, Jean Reno, Ving Rames
Action/Adventure
2
1 Hour 45 Minutes
Thank you for supporting DVD365.net when you order using the link(s) below.
Buy DVD
Story

When things go wrong and the entire MI team, bar Ethan Hunt are killed, Hunt calls the head of the CIA for protection. Things do not go well however when they meet. It seems that the entire mission was set up to catch a mole in the MI forces and since Hunt is the only member of the MI team to survive, he's the prime suspect.

Hunt decides that it might be better to go on the run and prove his innocence rather than face the justice system offered him by the CIA... No justice! Along the way, Hunt recruits some help in the form of some outcast former MI agents and goes to steal the real NOC-List, bringing out into open the real mole.

Yes, I know, its not much of a plot is it? Certainly its a very weak script. Mission: Impossible, however is not about script, its about pure action, and it actually does deliver the goods here with some great stunt sequences. Its a pity then, that there are some letdowns in the SFX area, namely some very obvious and badly done blue screening in the car with the reclusive "Max".

Picture quality is a slight letdown, although the colours are bright and vibrant, the picture has a slight softness about it, something I wouldn't have expected from the above-average bit-rate presented to us. Certainly, its not a bad picture, but it doesn't have that crispness and definition that most people look for in a DVD.

Its not all bad though, the sound is excellent, booming bass fills the room during the many explosions, some great surround usage is apparent even during the superb music. To top this off, the dialogue is crisp and clear making the film much easier to watch.

Extras are yet again, pathetic. Paramount needs to sort themselves out, everyone else has vast amounts of film material to draw upon for extras, a De Palma commentary would have been excellent, as would a storyboard, but what do we get? A trailer....A trailer of the film we have just spend our hard earned on...Thrilling...NOT.

Despite its faults, this is probably a good buy if you like your films no-brainers. Certainly, the sound rescues it, and those with 5.1 surround capabilities won't be disappointed.