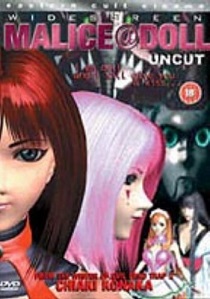 Review Article Go back to homepage
In a world devoid of humans a group of prostitute robots live out their lives without clients. But when one doll, Malice, is attacked by a tentacled creature, she is mysteriously transformed into a human.
Yukie Yamada
Fantasy, Eastern Cinema, Animation
All
1 Hour 14 Minutes
Buy DVD
Story

In a future world where humanity no longer exists, a group of artificially intelligent robot dolls live out their solitary lives as they have continued to do so for years. The majority of these dolls were created as prostitutes and each day they roam the streets in search of human clients who no longer exist whilst repairer and defender robots wait in background until they are needed. As time has progressed the dolls have started to break down and when one such doll, Malice, starts to leak coolant she is sent off by Joe Admin to find the repairer. But after being distracted by a mysterious ghostly phantom of a young girl, Malice finds herself in a corridor which she has never visited before.

Venturing into a strange room she is attacked and raped by a giant half machine, half organic tentacled creature and totally confused by what is going on she passes out. Malice eventually awakes in a dark corridor and, unsure of what has just happened, she walks to a nearby mirror. But rather than seeing the face of a plain and featureless robot, she sees what appears to be a human face looking back. Overcome with joy she rushes to inform the other dolls but, no longer registering as a robot, she has a great deal of trouble trying to convince them of who she really is. But with every gift comes a curse, and when she seeks to transfer her feelings by a loving kiss she triggers similar changes in another doll, only this time they are far from perfect.

With the picture being a clever mix of classic cell animation and CGI there should be very little problem with the picture quality. Fortunately, that is generally the case and although the film was created on a tight budget the resulting picture, and ultimately the transfer, is more than sufficient. The colours are rich and vibrant whilst the many scenes that contain a wide range of contrasting colours don't cause any problems with colour bleeding or outlining. There is a slight problem with grain, but this is either a deliberate ploy by the director or a consequence of the low budget - even if the film originates in the digital domain.

The sound is provided as two Dolby Digital 2.0 192Kbps soundtracks. The first is the native Japanese audio track whilst the second is the dubbed English version. Fortunately, animation doesn't pose too much of a problem for dubbing and the facial and mouth movements never really become out of sync with the sound. However, the sound is of a very low quality and the volume needs to be increased to a fairly high level before you can really tell what is being said. Matters aren't really helped with it being animation as any attempts to lip read are a complete and utter waste of time.

The menu is pleasantly animated and scored with a rather catchy tune whilst images from the film play in a small area of the menu. Menu choice wise there isn't a lot to choose from. You have the option of playing the film with either a Japanese or English soundtrack whilst the usual scene selection and subtitles options are present. The extra material, which on the whole is rather good, is presented on a static and silent menu.

One of the most interesting featurettes I've seen for a long time is the thirty minute feature Final Fantasies - A History of CGI Animation. Presented by the co-author of The Anime Encyclopaedia, and recorded in an amphitheatre at the Sci-Fi London premiere of Malice@Doll, Jonathan Clements provides his rather sparse audience with a host of interesting facts about the history of CGI in Japanese animation. Whilst fans of anime are bound to be familiar with many of the titles mentioned those relatively new to the scene, such as myself, will find the information extremely interesting. If only my college lectures could have been as interesting as this.

Next up, Yukie Yamada, who is the voice of Malice in the film, presents a 25-minute Interview with director Keitaro Motonaga and scriptwriter Chiaki J Konaka. Both talk candidly about the development of the film, the story and the use of CGI animation. Whilst it is quite interesting is is all spoilt by a cameraman who just can't keep still. With forever changing colours, close ups and different angles, anyone would have thought he was trying to showboat his skills to the big guys in Hollywood. Still, if you can put up with the resultant migraine, then it is a welcome additional to the disc.

The Character Model section contains a number of CGI stills of the various characters which appear in the film whilst the Artwork section contains, unsurprisingly, the artwork and some descriptive text for Malice@Doll and Artsmagic's other CGI release A.LI.CE. Whilst the character images are of some interest, the artwork section can really only be classed as filler material. The Filmographies section includes details on the character designer, creature designer, director and script writer Chiaki J Konaka. However, I find it a little odd that none of the character voices got a mention.

Things are wrapped up nicely with the trailers for Malice@Doll, A.LI.CE and The Blue Remains. As with the artwork section, these too could also be classed as nothing but filler material. However, there is something strangely alluring about all three and their Japanese creators have managed to create a set of trailers which make you want to investigate these titles further. I don't think that this is particularly special to these titles either but, unlike Hollywood, Japanese filmmakers have managed to find a way of showing off their films without giving too much away or completely boring the audience.

Malice@Doll is not going to be everyone's cup-of-tea, and I'll admit to it all being a little bit too weird for my taste. Still, true fans of the anime genre are sure to love this title whilst the extras help to add a big dollop of value to the package. Even though it has a very mild hint of hentai, with certain flash back scenes indicating just what the dolls had to put up with from their clients, it is not really particularly disturbing. Even so, be warned that Malice@Doll is not a title for a younger anime fan base.

Weird tastes or not, you can't take anything way from the Japanese with their highly original stories and ground breaking filming techniques which go about changing the industry overnight and influencing Hollywood the following day. If you compare the CGI against the likes of Toy Story and Monsters Inc, the animation looks rather dated. However, at the time of its conception it was pretty much cutting edge technology and it becomes even more impressive when the tiny budget is taken into consideration. But it was down to these very budget restraints which led the animators to find cheaper and quicker ways to animate the storyboards. So as they say, the rest is history.

There were high hopes for this CGI animated feature, but with its thunder stolen by the mega budget Final Fantasy : The Spirits Within, and given it's rather strange Alice through the Looking Glass meets Pinocchio style subject matter, it's not hard to see why it was forgotten or dismissed outside of Japan. Still, it's another well deserved slap on the back for Artsmagic as they continue to release obscure and relatively unknown titles in high quality packages. Malice@Doll may have limited appeal, but it's fans are sure to be more than happy with the results.