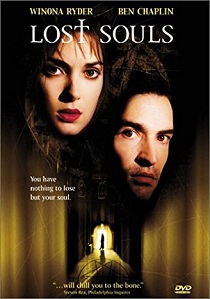 A small group of catholic priests, led by a frail Father Lareaux, are continuously on alert for the prince of darkness. The group believe, just like Jesus, that the Devil will appear in the form of a man. Trouble is, there's plenty of them about and the church distances themselves from their opinions and actions.

When the group perform a exorcism on a mental patient, Father Lareaux finds himself up against an evil he's never met before and it leaves both him and the patient in a bad way. Whilst investigating the apparent ramblings of the mental patient the youngest in the group, Maya, discovers a code which points to Peter Kelson, a high profile writer who studies serial killers. Could he be the chosen one?

As her investigations continue she keeps having strange visions and discovers that Peter has never been baptised. Things aren't helped too much by the fact he's, naturally, refusing to believe that he's the devil incarnate. With time running out before the transformation she must convince him before mankind is doomed.

The picture is rather disappointing. Although the picture has an above average bit-rate throughout the film it tended to be rather grainy during the darker scenes, and believe me there are plenty of those. It doesn't suffer from any pixelisation but there is the occasional amount of outlining.

Where the picture suffers the sound excels. Again the DTS soundtrack with its wider soundstage and superior separation gives much more of a haunting atmosphere to the Dolby Digital version. The surround channels especially benefit from the haunting ambient effects and the dramatic musical score.

The extras are reasonable enough with the inclusion of a Director's Commentary along with the usual Theatrical Trailer and Cast and Crew Biographies. There's also the welcome addition of some Deleted Scenes including a commentary. The animated menu system is good with some scary visuals and Dolby Digital sound effects which are a DVD rarity.

This film is a cross between the Omen, The Exorcist and End of Days. However, it still fails to give the necessary chills that both the Omen and Exorcist produced in abundance. There seems to be a definite problem in producing mainstream horror films and when Arnie fails to deliver with End of Days you know Hollywood is missing the plot.

Perhaps the conspiracy theorists should be more worried about the abundance of good vs. evil films of late. Perhaps it is a warning for us all, or maybe Hollywood are just on the merry-go-round. The battle between good and evil continues.