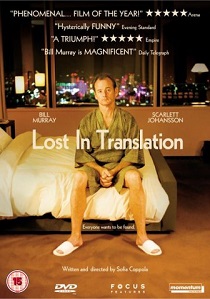 Bob Harris is an aging American film star who is well past his sell by date. He's one of those actors that can be easily labelled as a "has been" and can only ever muster up appearances on late night television chat shows. Accepting that his Hollywood career has well and truly ended, Bob has resigned himself to being under the thumb of his wife and picking up whatever scraps of work are thrown his way. His latest morsel of work has him arriving in Tokyo to shoot a commercial for a whiskey he's never even heard of, let alone drunk. But with his luxury hotel bar open all night he certainly intends to introduce himself to the product, that is if he can get away from his ever present Japanese press agents and his long distance relationship with his wife and children.

Charlotte is a young American woman tagging along with her workaholic photographer husband John. He's in Japan taking publicity shots of the latest music sensation and he has little time to spend with his wife of two years. Completely bored with her life, her husbands friends and his occupation, she spends most of her days lazing around in the hotel or wandering the streets of Tokyo taking in its fascinating sights and strange cultures. Young and desperately lonely she longs to find her purpose in life. Then one night, unable to sleep, she ventures down to the hotel bar and meets an equally sleepless Bob. And with this chance meeting they start to forge a surprising close and rewarding friendship.

With many of the scenes based in dark and dimly lit interiors grain and a general lack of image quality can be a bit of a problem. However, for the majority of the film the picture is bright and reasonably colourful with a surprisingly high level of detail. The colours also seem to be a little understated with an almost permanent addition of depressing and dampening blue filter. Whilst I found this a little trying at times, especially during the interior scenes, the cityscapes of Tokyo looked just wonderful. You only have to watch the films opening and introduction to the bright lights of downtown Tokyo to see that there's plenty of potential for both good and bad images. And although the film was made on a tight budget the print is clean and remains free dust scratches or other damage.

In a rather strange choice for this release the sound is presented with both Dolby Digital 5.1 and DTS 5.1 soundtracks. With the film being heavily dialogue based there is really very little need for both soundtracks, but never the less, both audio formats simply do what is needed for the film with total ease. And being dialogue based most of the sound activity is placed firmly in the centre channel whilst the front stereo channels offer some reasonable spatial effects. There us the occasional use of the surround channels for ambient and musical effects, but it's nothing special, but for a film of this genre it is to be expected and it is certainly more than sufficient.

With the lack of any audio commentary the addition of the DTS soundtrack seems to me as being a bit of filler. After all, it's not an important additional to the disc. If anything, this soundtrack should have been sacrificed in order to provide more capacity for far less compressed picture. Mind you, if this were the case then this disc would start to look a little on the barren side.

As a footnote to this, I normally obtain the sound transfer rates by using the PowerDVD software player on my personal computer. But other than the initial copyright information and the distributors logo this application stubbornly refused to play the disc. However, the same disc would play with no apparent problems with Windows Media Player. As a result of experiencing this playback problem, and assuming that the preview disc is the same as the retail version, if you own a cheap and cheerful DVD player or use a PC to playback your films then you may just want to keep hold of your receipt.

The main menu is simply animated and scored whereas the submenus are static and silent. Extras wise, there's a reasonable collection of featurettes and deleted scenes whilst the rest has a definite hint of filler material to them. I also felt that one major omission was an audio commentary. For all of Sofia Coppola's enthusiasm (and money) for the project you would have thought she would have found the time to head to the recording studio. Never the less, fans of the film will be more or less happy with what's on offer.

Highlight has to be the 30 minute Lost on Location behind the scenes featurette which follows Sofia Coppola from day one of the shoot. It covers most of the locations and offers some interesting information, such as how they cleverly circumnavigated the authorities by filming a street from inside a Starbucks whilst pretending to drink coffee, to seeing Bill Murray turning up on set and then effectively hogging the featurette with quotes from his "Learning Japanese" phrase book. Next up is the 10 minute Conversation with Bill Murray and Sofia Coppola. Filmed on a rooftop in Rome, and with Bill sporting a white beard, it doesn't really offer any additional information to what has already been given in the first documentary.

Also included are four deleted scenes which, judging by the films rather sedate pace, were most likely cut for timing reasons. It's shame really as there's nothing wrong with any of the scenes. If anything, they would have injected a bit more humour into the film. Following on is the very nearly pointless Matthew Best Hit TV feature. This is essentially the full wacky Bob Harris television interview with a Japanese version of British camp television host Graham Norton, except that Norton is funnier. Finally there's the good old filler material of a music video from an artist you've never heard of and the theatrical trailer.

What interests me the most about Lost in Translation is that the usual political correctness brigade quickly jumped on board and complained at the offensive way the Japanese people and their culture were portrayed. However, a friend of mine loves everything and anything that is Japanese and even has a Japanese wife. And from the many tales they tell it is obvious to me that Lost in Translation is not in the least offensive but absolutely spot on. Further more, from my own travels around the world it is quite easy to be both confused and in awe of these "foreign" cultures, again something else that Lost in Translation portrays brilliantly. If anything, Lost in Translation shows "westerners" as the strange types. I've always wanted to visit Japan and after watching this film I've become even more determined to visit this captivating country.

This really is a gem of a film and it's a real shame that Bill Murray lost out at the Oscars. It's even more of a credit to writer/director Sofia Coppola that she stuck with it and finally brought it to the big screen. The results are wonderful and Murray is a revelation in a role that only he could manage to portray. However, some people may assume that just because Bill Murray is in the film it is a straight comedy. It's not. Lost in Translation is more of a drama with subtle elements of comedy and as a result it may not be everyone's cup of tea, in fact I think there's a 50/50 split on peoples opinions. This is no Caddyshack, and if you're expecting something as such then you should definitely avoid.

Lost in Translation is one of my favourite films of 2004 and it's just a shame that Sofia Coppola couldn't provide an audio commentary, after all it was her film.