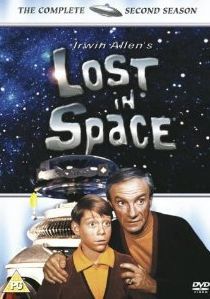 Carrying on from season one, we re-board the Jupiter 2 spacecraft with the Robinson family and their futile efforts to find their way to Alpha-Centuri after the stowaway Dr. Smith sabotaged the ships navigation system. Trouble is, Dr. Smith failed to escape from the ship before it launched and he too ended up being lost in space with the rest of the Robinson family.

Season two kicks off with the episode Blast Off Into Space and the Robinson family are trying to get Jupiter 2 ready for launch. Their launch plans have been brought forward somewhat by the fact that the planet they originally landed on is rapidly falling apart. The planets problems have be exasperated by the mining operations of a visiting alien called Mr. Nerim and, he too, is packing up and getting ready to leave. Trouble is, his spacecraft has developed a fault and he can't leave without a new thruster unit.

Nerim was not interested in mining the abundant supply of diamonds beneath the surface of the planet, but was after something far, far more scarce and extremely more valuable. On learning this Dr. Smith soon befriends Nerim and offers him one of Jupiter 2's thruster controls in return for some of his mining booty exploits. Naturally, this all backfires on the hapless Smith and his actions soon have the Robinson family fighting for their survival as the planet disintegrates around them.

The first series of Lost in Space was filmed in black and white whilst subsequent seasons were made in colour. So naturally we have a massive improvement in picture quality with a transfer which is rich and vibrant with a remarkably high level of detail. Sure, there are problems with grain and dust specks, but overall things are rather good. In fact, they are too good, and you'll end up spending more time laughing at costumes and sets which make Star Trek look like amazing feats of engineering. Still, that's half of the fun.

With the series originally broadcast in 1965, television broadcasts with a stereo soundtrack are still a few years away yet. But the Dolby Digital 192Kps mono soundtrack is more than sufficient and you can dispense with the surround system and crank up the television volume instead. Never the less, the dialogue remains reasonably clear throughout and you can enjoy the cheesy dialogue with ease.

As with the previous season, the menus are a static and silent affair with the episodes available for selection. Likewise, the extras aren't up to much either, and if anything they're less interesting. Whereas the first season contained the unaired pilot episode all we have here are a collection of slides with a few audio interview clips with June Lockhart, Guy Williams and Jonathan Harris. Mind you, I'm sure true fans will find something of value here whilst the casual viewer may be a little disappointed. Still, I'm sure it will only be the fans that will purchase anyway.

Season two also includes the favourite episode of Lost In Space fans, The Golden Man where two warring alien factions, a golden man and a frog creature, land near the Robinson's camp. Penny aligns herself with the frog, while Dr. Smith naturally sides with the golden man, who may not be as virtuous as he initially seems. Whilst the acting and the special effects are rather poor (landmines made out of beach balls for heavens sake!!) the storyline is just brilliant.

So with some ever so slightly better special effects, awful (but still highly amusingly and camp) acting and some good storylines (with the usual anti-communist ramblings of the era) and you have a fun science fiction series that the entire family can enjoy.