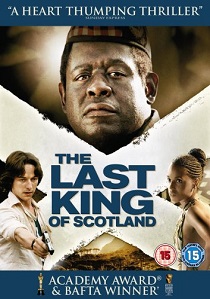 Set in the 1970s, Nicholas Garrigan is a naive young and recently qualified doctor. Desperate for adventure in a far-off country, he spins a globe and stops it with his finger with where ever it stops being his chosen destination. His first attempt was Canada, so spinning once again, this time it stops in Uganda. Upon arriving in Uganda as an aid worker he doubles the number of medical staff working with Dr. David Merrit and the local population. But there is a revolution taking place and it doesn't take long for Nicholas to become excited by the possibilities that it may bring to his rather boring life.

So when the newly crowned Idi Amin arrives to address to the local population, Nicholas heads to the meeting to soak up the atmosphere and feel the excitement. It's something he's never seen before and loves every minute of it, whooping and shouting at everything Amin says. However, upon returning to his village a soldier stops him and demands his immediate assistance as Amin has been injured in a road accident. Arriving at the scene, he quickly gets to work on the infuriated Amin, and when Nicholas shoots the injured cow that caused the accident, Amin is impressed with his cool and authoritative behaviour - plus he loves the fact he's Scottish as his ex-army officers were Scottish. So when Amin offers him the chance to become his personal physician, Nicholas jumps at the chance to better himself.

Embracing his new found life of luxury, everything seems so rosy - with party after party and women galore keeping him sheltered from the world outside the presidential compound. Living in his own isolated world it leaves him totally unable to grasp the true reality of the situation in Uganda and the violence all around him. But when he's caught up in an assassination attempt on Amin, he slowly starts to see just how unstable the man is and when he does finally realise the atrocities Amin is inflicting upon his people, the terrified doctor tries to make a frantic escape before it's too late.

The picture is bright and colourful, with a slightly bleached appearance, with a good level of detail that brings out the 1970s Uganda. The varying interior and bright exterior scenes are handled with ease and the above average bit-rate results in a crisp and clear picture with no signs of artifacting or outlining. Black levels are impressively solid throughout and problems with grain or pixelisation are far and few between. The transfer is also clean and free from dust scratches or other forms of picture imperfections, although given that this is such a recent release I'd be surprised, and disappointed, if this were to be any other case.

As with the picture, the 448Kbps Dolby Digital 5.1 soundtrack manages to control things well enough to enhance the enjoyment of the film. Whilst The Last King Of Scotland is essentially a dialogue based soundtrack, there's still plenty of activity in the surround channels - especially during the opening scenes with the enthusiastic crowds and many catchy African musical scores - to keep your surround system occupied. The dialogue is clear and precise in the centre channel and remains fixed throughout without any cross channel bleeding whilst front stereo channels offer some good directional effects. The only channel that wasn't particularly challenged was the LFE, with little or no activity for the majority of the film - although it wasn't something that the film really required.

Once you get past the exhausting eleven minutes worth of trailers (fortunately, you can skip straight to the menu) for Rocky Balboa, Notes on a Scandal, The Fountain, Pathfinder and Sunshine you are greeted with a static but scored main menu. Each of the sub menus, although static, are also scored with some of the dramatic music from the film. The special features are then listed on their own sub-menu.

Extras wise, the highlight has to be the Audio Commentary with director Kevin MacDonald. Whilst I usually bemoan the lack of input from the principle stars of a film, in this instance Kevin is in a league of his own, supplying interesting detail about the various locations, how things went during the shoot and numerous other facts about Idi Amin and Uganda. This valuable input can also be continued with eight Deleted and Alternate Scenes running for a shade just under twelve minutes. Again, Kevin is on hand to provide an optional and interesting commentary on the scenes that got left on the cutting room floor. However, the only minor complaint I have is that, although each scene can be individually selected from the menu, the Select All option is at the bottom of the menu and not easy to navigate to.

The six minute Forest Whitaker - "Idi Amin" featurette concentrates at Forest Whitaker's role in the film - although James McAvoy does manage to crop up every now and again. Essentially made up of interview footage and clips of the film, it's all perfect PR fluff to publicise the film. Never the less, it shows Whitaker at his best. The twenty nine minute featurette Capturing Idi Amin is just as important viewing as the film itself with plenty of background to the film, including interviews with local people and current members of the government who remember Idi Admin with both revulsion and celebration. Dotted with historical television footage, the various cast members, the author of the original book and various production crew members are interviewed. Even BBC journalist John Snow turns up on the set and offers his own opinion on the Amin - even stunning some of the cast by producing some secret, and rather chilling, documents he'd rescued from an abandoned command post. It's a remarkable featurette and certainly worthy owning in its own right.

I never really like any self congratulatory featurettes so I was quite disappointed to find the nine minute Fox Movie Channel presents: Casting Sessions - The Last King of Scotland on the disc. Naturally, being a featurette to promote a film on Fox's own network it's never going to be anything else than a back slapping exercise with cast and crew interviews. It doesn't disappoint. The extras are rounded off with the Theatrical Trailer. All in all, a cracking set of extras for what is a rather cracking film - and congratulations to Fox for ensuring each of the extras is equipped with English subtitles for the hard of hearing.

Although the story is a fictional one, with a screen play based on the acclaimed novel by Giles Foden, the actual background to the story couldn't be any truer and it makes for some gripping and gruesome viewing. As usual, people like to blame the British for their colonial rule and subjugation of the local population, but in this instance it was indeed the British - thinking he was a splendid type and good football player - who promoted a young Amin up through the ranks prior to Ugandan independence in 1962. But then again, and like most other ex-colonies in Africa and beyond, the British left a functioning democracy and a country able to feed itself.

But when in 1971 Amin seized power in a military coup, both the international community and Uganda itself mistakenly embraced Amin's new voice of the people - promising so much to a country still celebrating its independence. However, that was until Amin went on an eight year murdering campaign that resulted in an estimated 300,000 deaths - although some organisations put that figure closer to 500,000. Although the international community did little or nothing to intervene, preferring to lampoon him in the press as a murdering buffoon or cannibal, they only started to take notice once he'd severed relations with Britain and expelled 50,000 Asians.

Since its theatrical release, The Last King Of Scotland has received much international acclaim, sweeping the board with 23 awards and a further 12 nominations. Forest Whitaker also won more awards for his performance than any other leading actor in 2006, amassing 16 in total, including an Academy Award, a BAFTA and Golden Globe for his remarkable portrayal of Idi Amin. Naturally, this came at a cost to the production crew as he become rather difficult on set as he remained in his character throughout filming. Never-the-less, his awards do speak for themselves and make the film all the more attractive - even if the main plot doesn't really revolve around him.

The Last King Of Scotland certainly deserves its many accolades and director Kevin MacDonald, already know for his intense and expert handling of the docu-dramas One Day in September and Touching the Void, ensures that this one heck of a disturbing - but must see - film. Highly recommended.