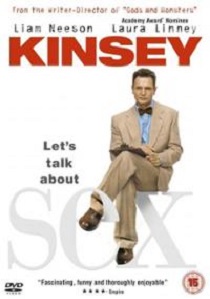 In 1948, Alfred Kinsey, a college professor at Indiana University, published his study Sexual Behaviour In The Human Male. However, Kinsey had never intended on publishing such a book, preferring to concentrate on his near obsession of researching and collecting 1,000,000 gall wasps, plus being an animal biologist and having been brought up by a Methodist minister father who thought the invention of the trouser zipper was wicked due to it's ability to allow quick and easy access to the area, he was little equipped to deal with such a touchy and unmentionable subject matter.

But with his students constantly asking him awkward questions about sex, and with the only information in the University preaching abstinence, Kinsey, and society in general, was unable to provide the answers. So being a researcher he decided to find out the facts and present them as a sexual education course for any student contemplating marriage. But with a limited amount of information from his students he decided to devise a probing and confidential questionnaire which could be put to the populous in general and published in his book Sexual Behavior in the Human Male. So, together with a dedicated team of researches, Kinsey spent years traveling the length and breadth of America questioning thousands of people about their sexual attitudes and behaviour. The results were astounding.

Before the study was published, many believed that masturbation would make you go blind or insane, that homosexuality was an extremely rare sexual deviation and that sex only took place within marriage. Most people in mid-1940s America simply didn't talk about their sex lives, let alone ask questions about them. Kinsey's research blew all these misconceptions out of the water, and his book became a best seller, sparking a debate that still rages today. Even J. Eager Hoover was wanting to use his information to hunt down Homosexuals as well as Communists in the state department. However, he was not without his critics, and he became a target for Congressional witch-hunters who accused him of warping the minds of America with his filth.

The picture is bright and colourful with a good level of detail and colour depth with the 1940's style cleverly reproduced with a slightly over saturated look. Black levels are impressive throughout and there are no signs of artifacting, whilst edge enhancement problems are kept to a minimum with only the occasional black-and-white scene becoming a little too challenging for the encoding process. With the film being such a recent release the transfer is clean and free from dust scratches or other forms of picture imperfections. Given the rather low key nature of the film it was quite a pleasant surprise to discover that the film was graced which such a good transfer.

The disc is equipped with both 448 Kbps Dolby Digital and 768 Kbps DTS soundtracks. Both are as good as each other, although there is very little to challenge either soundtrack, but as usual the DTS soundtrack offers the benefit of superior separation and as such should be the soundtrack of choice. The dialogue is crisp and clear in the centre channel whilst the front stereo channels are mainly used by the musical score. Likewise, there is very little activity in the surround channels and they are again only used by the musical score and the occasional ambient effect. Still, this is not a problem as the film doesn't warrant anything spectacular and what is offered here is more than sufficient for its needs.

After negotiating the now ever present anti-piracy spiel and the increasing annoying trailers for releases, in this case Kingdom of Heaven, a montage of titles in Twentieth Century Fox's 70 year celebrations, Melinda and Melinda, The Chorus and The Fantastic Four, the displayed main menu is scored and animated with cut scenes from the film scrolling across the display. The sub-menus are boring static and silent affairs which don't match the style of the main menu. Extras wise, it's a bit of a mixed bag really, and considering the impact that Alfred Kinsey had on the chattering American classes of the late 1940's, I'm very surprised that there was no featurette or even notes about the man.

The highlight of the somewhat sparse set of extras is the rather interesting Audio Commentary from director Bill Condon. Being the writer and director he knows the film pretty much from the inside to out and he provides plenty of information on the real Alfred Kinsey, the films other characters, the sets and the actors involved in the film. Sure, there's the usual back slapping stuff, and there can be the occasional silent moment as Condon watches the film, but overall it's a cracking commentary from a director who clearly loved the project. The audio commentary is also available as a subtitle track so you can also watch the film and read his comments.

The twenty one Deleted Scenes run for a total of twenty four minutes and can either be viewed in one go or individually selected from the various menus. None of the scenes are really of much interest, and they can be simply classed as being removed for pacing purposes, but it's nice to see them presented in full theatrical quality. Bill Condon is also on hand to provide an audio introduction to each scene and, as with the main commentary, it's all interesting stuff. The three minutes worth of Gag Reel is worth a look in, even if it's not that amusing, and watching someone fall about laughing as they mess up their lines or struggle with the props soon becomes rather tedious. Still, there's a nice bit of over acting from Liam Neeson which manages to raise a laugh.

I'm always suspicious of these Inside Look featurettes and it's fairly normal to expect at least one to appear on a Twentieth Century Fox release. However, in the case of Kinsey we have two looks at Kingdom of Heaven and Sideways and it definitely reeks of filler material (I even have my suspicions about the DTS soundtrack too). Given the importance of Kinsey's work it would have been much more interesting to have had a featurette on the man himself, although the tight budget may have hindered this somewhat. However, the lack of extras does spoil things somewhat, even more so when you consider that the region one edition is also available as a two disc special edition. Still, at least the audio commentary is of a high quality and it enables the disc to retain a reasonable level of value for money.

Given that taking about sex in America is still a rather taboo subject it is all the more surprising that a film such as Kinsey was ever made. It's probably even more surprising that the film was directed by someone with the rather unfortunate name of Condon. Oh, how those immature people must have sniggered about that. Kinsey is no American Pie, or any other teenage film for that matter, and it manages to portray a potentially embarrassing subject without treating the audience like a bunch of idiots. It's documentary style is also inspired, with Kinsey being interviewed by one of his staff accompanied by flash backs to his past, and it's just a great shame that the many barriers that Kinsey managed to brake down have virtually reappeared thanks to a moral minority.

The Oscar nominated Kinsey is not going to appeal to everyone and it's fair to say that some people may even be offended by certain nude scenes and graphic pictures used during Kinsey's university lectures. But considering I'd never heard of Kinsey, let alone his important work, it was a rather insightful look at a more prudish time. The film is also helped by the superb acting from Liam Neeson in a performance which must be put down as one his finest in an already impressive career. It may not be a title to consider buying, but a rental may just be worthwhile for those curious types.

DVD
A fascinating exploration of female friendship, urban class divide, social media, and motherhood, all wrapped up in an edge-of-your-seat thriller, The Secrets She Keeps arrives on DVD 10th August 2020 ... END_OF_DOCUMENT_TOKEN_TO_BE_REPLACED
Latest ReviewsView

Welcome to Kehoe, it's -10 degrees and counting at this glitzy ski resort in the Rocky Mountains. The local police aren't used to much action until the son of unassuming town snowplough driver, Nels Coxman, is murdered at the order of Viking, a flamboyant drug lord. Fueled by rage and armed with heavy machinery, Nels sets out to dismantle ...