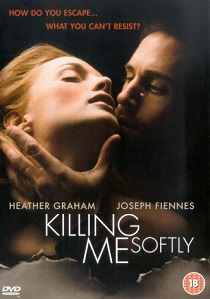 Alice is a young American woman working in London. She has a successful career as a web designer, a dependable boyfriend who loves her dearly and great friends and colleagues. However, that is all about to change when she has a chance meeting with a dark and handsome stranger on the street.

Intrigued by the stranger she follows him to a nearby book store and discovers that it is the famous mountaineer Adam Tallis, and she's totally fallen for him. Alice soon finds herself in the back of a taxi and heading for his apartment where she inspects his mountaineering tackle in more ways than one. Totally blown away by his sexual prowess she decides to leave her current boyfriend and move in with Adam.

Within days of moving in, Adam proposes and Alice decides to throw all caution to the wind and accept. They are soon married and head off for a mountaineering style honeymoon, low on climbing but high on passion. However, when they arrive back in London Alice starts to receive anonymous letters asking her to question her decision. As the letters get more frequent Alice soon realises that she knows virtually nothing about the man she's just married.

The picture is bright and colourful with some rich colour and flesh tones. The bit rate remains average throughout the film and there are no real signs of either artifacting or outlining. In fact I would have to say that the picture looks more like standard made for television material. However, to be brutally honest, the picture standard is still better than some of the more major titles available on DVD today.

The dialogue is clear and precise in the centre channel whilst the other channels are used with reasonable effect. However, there were plenty of moments in the film where I clearly felt that there had been overdubbing, especially when plumb English accents were called for. But for a film of this genre the dialogue plays only a minor part, and it needs to do really because its all pretty baffling.

The menu is a rather boring affair with two static images of Heather Graham and Joseph Fiennes. The menu is at least scored with a bit of haunting music, but its still nothing to get too excited about. The extras are also rather bland with a Theatrical Trailer and rather short Making of Featurette in which both actors seems overly excited about their roles. At least these extras add a little value to this back catalogue title.

This film has some tragically cheesy and just plain awful dialogue. I'm sure you were suppose to take this film seriously, but I spent most of the time laughing at just how ludicrous it all was. I'd got so fed up with it all that I took the totally ridiculous plot twist in my stride. I've no idea whether this film had a theatrical release, but it really did have the feel of a made for television sexual thriller which channel five would be aching to show. It was even difficult to class this film a thriller, more like an episode of Eastenders, but with less clothes.

I'm sure that the fact that Heather Graham nearly bares all for the camera will be an attraction to some, but for most other film fans this really is going to be left on the shelf. I'm also pretty much certain that both Heather Graham and Joseph Fiennes would also prefer you to leave the film on the shelf too as they must cringe whenever this film is mentioned.