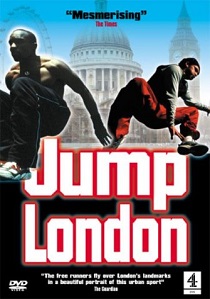 Back in September 2003 Channel Four broadcast a documentary about the new urban sport of Free Running, or its more traditional French name of Le Parkour. Originating from the varied architectures of a Paris suburb, this new urban art-form expects its participants to practice the "art of movement" by finding a way around or even over a number of obstacles or buildings. This is certainly no extreme version of skateboarding as the sport is based heavily around eastern philosophies which encourages self discipline, self-improvement and interdependence.

Most people would just take the easy route, but not these Le Parkour guys. In order to get from one location to another they'll perform a number of amazing Spiderman style stunts by literally leaping from rooftop to rooftop, somersaulting, vaulting and even tumbling without as much as a scratch or safety net in sight. And with France all Le Parkour'd out, sport co-founder Sebastien Foucan and his team of eager runners have arrived in London to do a bit of sight seeing of a different kind. Are they mad? Sure they are, but it makes for some amazing viewing. This documentary records their amazing accomplishment.

After a lot of negotiating with the owners of various buildings the team have been given unprecedented access to some of London's most famous landmarks, including the National Theatre, HMS Belfast, the Millennium Bridge, Tate Modern, Shakespeare's Globe Theatre, Somerset House, the Saatchi Gallery and the Royal Albert Hall. Whilst most tourists are more than happy to wander around these buildings and buy the occasional postcard to send home, these Le Parkour guys plan to run, jump and tumble all over the place. Boy, are the local residents going to be confused by this lot.

For a terrestrial television documentary the picture is remarkably clear and sharp Whilst the bit-rate varies wildly throughout, the picture remains pin sharp at all times with no signs of either artifacting or outlining. There are only slight problems when archive footage, such as old television advertisements, is used. However, this is down to the quality of the material and is out of the hands of the producers. Channel Four can certainly produce the goods when it comes to the picture quality of its home grown documentaries and dramas. As a result you have to suspect that the documentary was recorded using HD equipment (there's a DV editor in the closing credits) so this quality would be naturally reflected in any subsequent DVD release.

Again, being a terrestrial television documentary there isn't going to be much scope, or requirement, for a dynamic soundtrack. The two channel 192Kbps Dolby Digital soundtrack is more than sufficient for its needs and, if anything, it surpasses the usual sound quality of a terrestrial television programme. Being dialogue based the clarity of the main narration is excellent whilst the musical score is just as good. However, the dialogue from the onscreen stars and their many confused onlookers can become rather muffled at times and you'll be thankful for the onscreen subtitles.

The menus are pleasantly animated with various scenes from the documentary as well as being scored with the same funky music used in the programme. This is certainly no simple cash in as there's been plenty of thought and effort put into the presentation of the disc. The extras also add some much needed value to the rather short documentary as well as explaining a bit more about the guys behind the Le Parkour movement.

The highlight of the extras is the Making of Jump London featurette and running at around 26 minutes it adds some much needed value to the disc. Although it repeats some of the information from the main documentary, it still manages to reveal some additional information about the runners preparations in both executing as well as planning the jumps. It also spoils it slightly by taking away some of the spontaneity by showing all of the safety precautions employed by the filmmakers (although this is probably to satisfy the HSE demands from the programme makers and the various building owners).

The main documentary is also complemented by an audio commentary from the director and producer. It's certainly odd to have an audio commentary for a documentary, but there was so much enthusiasm for the project it would be hard to deny them the chance to speak. And there's never a dull moment as they explain the ideas for the programme as well expanding on the various safety aspects explained in the making of feature. However, much of their information is a repeat of what's already been explained and, although the commentary is interesting enough, you can gain just as much information from the featurette.

Next up is an extended interview with Sebastien Foucan. Running at just over 11 minutes it explains a bit more about the origins and philosophies of Free Running but Since Sebastien speaks in French it can be a little hard going at times, even with the voice over translation. Following on from the interview are a number of interesting multi-angle and split screen shots of the various jumps. Some jumps have two angles whilst others have three and they can be viewed in either split-screen, with all the camera angles at once, or as multi-angle with each angle selectable via your remote. It does whiff of a slight padding exercise, but at least you have a choice.

I've been aware of the Le Parkour craze for sometime and even own the groups Luc Besson directed Yamaksai film on DVD. Yet the documentary barely touches on their real talents and the programme mainly shows them simply jumping (albeit rather impressively) around or onto buildings. Only in the build up and the actual jumps around the Globe Theatre and HMS Belfast do they get to show what they really can do. Furthermore, if you're lucky enough, you may even catch a glimpse of co-founder David Belle promoting BBC programming by dashing home via roof tops in true Le Parkour style. It's just a pity its not included on the disc, although I suspect a channel four documentary may have trouble using a BBC logo.

Although there is interest growing in this rather extreme sport I would have to question the point of this DVD release. Sure, there's no doubting that it is extremely interesting documentary, but would you really want to watch it more than once? The main problem is that, unless you're a fan of this new urban sport, Jump London probably doesn't have much repeat viewing potential.

Problems are exacerbated by the price of the disc. With a RRP of £19.99 for a single disc documentary that runs for less than an hour is a little extreme to say the least. Even with the reasonable set of extras on offer you really have to question what Channel Four are up to in charging this amount. Even the usual on-line discounts still make this disc rather expensive and as a result it makes it hard to recommend as a purchase. However, a rental from your friendly store is a better prospect, and much better value too.