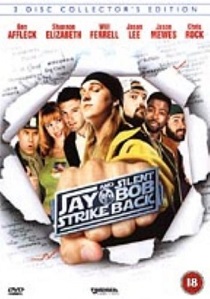 Jay and Silent Bob are a bunch of stoners who spend all of their waking days hanging out at a convenience store selling their own brand of "special" smokes. Mind you, they are not total pot head losers as they have a comic book containing their alter-egos Bluntman and Chronic. However, during a visit to a comic book store the pair learn that a friend has sold the rights to their comic book to Miramax.

Accessing the internet for the first time they discover that Miramax are due to start filming and they won't see a penny from the proceeds. Jay and Bob are also not that impressed with the comments various people have being about their comic and their unbelievable characters. The pair are not impressed so they decide to head to Hollywood and get the picture stopped.

As the pair travel they have many strange encounters. There's hitch-hiker who'll do anything for a ride, a nun who is obviously not going by the same book Jay is thinking of, a group of teenagers who look suspiciously like the Scooby-doo crew and a group of tightly leather clad diamond thieves who dupe the pair into rescuing a chimpanzee from an animal experiment laboratory. Oh, and did I mention that they end up heading a terrorist organisation called CLIT?

The picture is bright and colourful with plenty of detail and has an above average bit-rate throughout. There's no signs of artifacting, outlining, dust specks or general picture imperfections. For such a recently created film I would be surprised, and annoyed, if it was any other way.

With the film being virtually dialogue based there is little need for masses of fancy surround effects. When they are required, such as during the explosive scenes at the animal laboratory and the final fight scenes, the surround channels burst into life and are certainly good enough for a film of this genre. The dialogue is clear and crisp in the centre channel and there's never any need to correct the volume so you'll be able to hear the vast amount of profanities with ease.

Although the menu is static it is not totally boring as it contains an occasional strange audio quip from the various characters. Kevin Smith is most definitely a fan of DVD, and as a result this film is positively bursting at the seems with additional material. There's so many extras that they come on their own disc and its going to take a good two hours to plough through them all.

For a start, there's nearly 90 minutes of Deleted Scenes with each one introduced by Jason Mewes, Kevin Smith and a number of other cast members. There's also a number of behind the scenes featurettes which go someway to show just how much swear adlibbing came from Jason Mewes.

If you thought that the record for copious amounts of swearing and liberal use of the "F" word in a film was held by South Park then you'll be wrong as we have a new record holder. I don't think I've heard so much swearing in a film in my life! If you are easily offended by this sort of thing then you'd better avoid this film like the plague, mind you, if that was the case you wouldn't get going anywhere near this film in the first place!

This film is complete and utter madness from start to finish. Its worth buying just for the final light-sabre dual with the one and only Mark Hamill who, sporting a bright orange wig, riotously makes fun of himself. Great stuff.