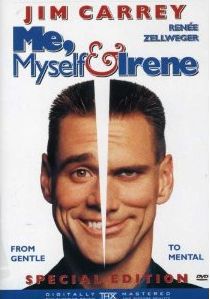 ReviewComedyJim Carrey
Review Article Go back to homepage
A man with multiple personalities falls in love with a woman, only to discover that his other personality, Hank, is also in love with the same woman.
Jim Carrey, Renée Zellweger, Anthony Anderson, Mongo Brownlee, Jerod Mixon, Chris Cooper, Michael Bowman, Richard Jenkins, Robert Forster, Mike Cerrone
Comedy
1
1 Hour 56 Minutes
Thank you for supporting DVD365.net when you order using the link(s) below.
Buy DVD
Story

Charlie is a mild mannered Rhode Island state trooper whose non-confrontational approach has led to the local population taking advantage of him. His neighbour steals his morning paper and allows his dog to crap on his lawn, whilst the locals completely ignore his attempts to enforce the law. However, one day he can't take any more and Charlie breaks in probably the best scene in the film as a woman with a slight fungal problem suffers his wrath.

Charlie becomes Hank, a no-nonsense alter-ego who lays down the law in dramatic fashion. His methods truly shock the Rhode Island police department and they arrange for him to seek specialist help. The department sends him to see a psychiatrist who prescribes some pills to help control his problem.

Charlie is assigned on a straightforward mission to return a female fugitive, Irene, back to up-state New York to answer some motoring charges. However, the simple journey becomes life-threatening as the pair find themselves on the run from a group of corrupt police offers. Charlie's attempts to keep Irene alive would be a made lot simpler if he hadn't misplaced his pills resulting in Hank appearing at the most inopportune of moments.

The picture is bright and colourful with some fabulous colour tones and detail. The above average bit-rate delivers a cracking picture with no signs of artifacting, picture noise or outlining. It truly deserves its THX certification and is yet another film which highlights just how good a picture can be on DVD.

Although the disc is THX certified, with the standard boring THX fanfare at the beginning, the sound is rather bland. There's some use of the surround channels by the ambient effects, and the fallback use of the helicopter, but most of the action takes place in the centre channel. To be THX certified it has to be good, and sure enough, it delivers clear and precise dialogue throughout the film.

The film is also complemented by a barrage of extras. From the animated and scored menu, there are the usual TV spots, featurettes and gallery. Also included, and one of my favourite DVD features, is an optional extended branching version of the film. This allows you to view the deleted scenes as the directors intended them to be included in the film. Finally, no Farrelly brothers film would be complete without an Audio commentary.

The warped minds, and sense of humour, of the Farrelly Brothers are well and truly at work in this completely politically incorrect film. Although the style of the film is very similar to their classic There's Something about Mary, it fails to deliver the same number of laughs. Although Carrey delivers yet another funny performance, reminding me of the much underrated Cable Guy, it just lacked that little something.

However, If you are a fan of the Farrelly brothers you'll still love this film and it should be added to your collection. On the other hand, if you like Jim Carrey, but are a little reserved in the sick jokes department, then you should perhaps consider giving this one a miss, baring in mind that you risk missing out on a classy Carrey performance.