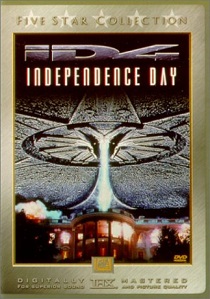 The date is July 2nd and the world's communication satellites are going crazy with strange interference. When the American military pickups a gigantic object on a collision course with earth they think its a meteor. However, the "meteor" has just slowed down and bits have just broken off and are heading for all the major cities on earth.

The question of whether we are alone in the universe has just been answered. Huge spacecraft now hover above cities all over the world and all attempts to communicate with the aliens have failed. When television technician David Levinson discovers a code in the satellite interference he suspects that the aliens are going to attack.

His ex-wife works at the White House and he is a friend of the president of the United States, although he actually has a fist fight with him a few years back. He heads for the White House to explain his discovery and together with fighter pilot Captain Steven Hiller leads the attack against the alien invaders on the 4th July - now earths Independence day.

Both the picture, and especially the sound, are brilliant. I've been critical in the past of some of the THX certifications given to some Fox titles where the pictures have suffered from whiskers and graininess. However, ID4 makes up for these past problems. The picture is bright with rich vibrant colours making the special effects really standout. The blackness of space against the approaching alien space craft is just wonderful. You can't tell where the live action stops and the special effects take over.

The sound is awesome. The battle scenes at the beginning, and especially the end, of the film envelop all of the channels with huge explosions whilst aircraft and alien spaceships scream around the soundstage. The massive explosions during the initial alien attack are amazing, my whole room was rattling with the LFE's. God knows what the neighbours thought! The surrounds where hardly ever idle throughout the film. They were used for hundreds of atmospheric sounds from the chatter of helicopters, fleeing people and the eerie effects in the area 51 laboratory area. Truly the demonstration DVD of the year!

The animated menus are simple, but stunning. I have never seen anything quite like them before. When you initially access the menu you see the white house with an alien ship hovering above it. The president can then be heard talking to his staff and as soon as you select another option you pan around the screen to another menu with more quotes from the film. When you finally start the film the white house gets its comeuppance.

Independence Day is treated like the original disaster movies. Each major cast member has a story to tell, and yes, there's even an ill child thrown in as well, although this is only really apparent if you watch the extended version of the film. The film even attempts to show everyone working together and bringing old enemies together - there's even a brief view of an Arab and Israeli pilot shaking hands.

By watching the extended version of the film (why would you want to watch the standard version?) you get to see that other major cities outside the US also suffered from the alien onslaught. Quite a few of scenes are also extended in length. There is even one restored scene in area 51 which has Dr. Brakish Okun showing David around the alien ship.

The set includes a glossay booklet. Okay, its not strictly speaking glossy, but you get a brief description of the special effects behind the film and a brief overview of the major cast members and production staff. With the amount of extras on the second disc this booklet is a bit of a let down.

The sound and LFE's are awesome, the picture is superb, has truck loads of extras and the menus are breath-taking. Ok, so the plot is a little stupid, some of the lines are ludicrous and there's too much American flag waving, but if you only buy one DVD this year then make sure it is Independence Day. It is a stunning disc and exceptional value for money. Buy, buy, buy!!