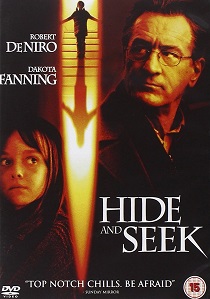 Following the death of his wife in a suicide, Manhattan psychologist David Callaway decides that both he and his young daughter should make a fresh start by moving to rural upstate New York. With his daughter Emily in therapy and still heavily traumatised by the events leading up to the death of her mother, David feels that this new start will help them both forget the distressing memories. However, the change in surroundings doesn't help Emily and she becomes increasingly withdrawn and even starts to draw strange and bizarre pictures that even shock her father.

David tries to help the situation by introducing Emily to a local girl her own age, but Emily refuses to play with her and sends her scurrying away in fear. In fact, the only person she seems interested in talking about is her new imaginary friend named Charlie. Despite David's best efforts, Emily simply refuses to disclose any information about who or what Charlie actually is. But as a series of horrifying events begin to unfold, and with Emily placing the blame firmly on Charlie, David begins to suspect that Charlie may not be as imaginary as he first thought and who or whatever Charlie is, is making more and more disturbing visits to the house.

With the film set in a rural location and in the autumn the picture is not going to be the brightest around. However, this is deliberate, and along with the dark and gloomy interiors of the Callaway house you know that you're going to be in for some creepy goings on. Still, the few colours on show are rich and detailed whilst the black levels are impressive throughout. And given that the majority of the film takes place either at night or in dimly lit locations those black levels really do need to be on top form. Fortunately, they are, and there are no problems with either artifacting or outlining. Also, with the film being such a recent theatrical release there are no problems with dust scratches or other forms of print damage.

The film comes equipped with dual 448 Kbps DTS and 768 Kbps Dolby Digital soundtracks. Whilst it's great to see that Twentieth Century Fox are continuing to embrace DTS, it's hardly the best of films to showcase the two formats. Never the less, the superior separation provided by DTS soundtrack ensures that it comes out marginally on top and should be the soundtrack of choice. However, one of the first problems with Hide and Seek is that it should be a sound showcase that delivers the shocks in all the right places. But rather unfortunately, it fails to do so.

Given the dialogue intensive nature of the film most of the action occurs in the centre channel whilst the surround channels are used with reasonable effect for the ambient effects. The front stereo channels manage to provide some good stereo steerage whilst the LFE channel remains rather quiet throughout. It's all rather disappointing and with the opportunity for creeps and jumps galore, you should be watching this film safely behind the sofa or handy cushion. But the sound ultimately fails to deliver the shocks when it had the chance, and given the lightweight nature of the film its hardly surprising that the tension isn't improved by the sound.

After negotiating the now ever present anti-piracy spiel and the increasing annoying trailers for new releases, in this case a montage of titles in Twentieth Century Fox's 70 year celebrations, Melinda and Melinda, Flight of the Phoenix, Creep, Kinsey and The Fantastic Four, the main menu is scored and simply animated. Along with the theatrical version of the film you have the choice of opting to view one of four alternate endings. Once a selection is made another menu is displayed containing the usual Scene Selection and Special Features menus which are both static and silent affairs.

Extras wise, there's a fair collection on offer with the main extra being the full length audio commentary from director John Polson, screenwriter Ari Schlossberg and editor Jeffrey Ford. Obviously blind to the holes in their wonderful production, the group chatter happily throughout and talk about the various changes to the flow of the film with different openings and endings. Still, there are a few nice little nuggets of information and plenty of praise for the precocious Dakota Fanning, and rather too much for Robert De Niro.

With a useful Audio Commentary from director John Polson, the three minutes of Previs Sequences contain three sequences that were storyboarded but ultimately didn't make it into the film. The three clips are basically extended versions of scenes used in the film with the addition of a storyboard for the unfilmed sections. The scenes are interesting enough, but they really wouldn't have added much to the film although, without giving the plot away, the closing scene in the cave had possibilities. Running for just under twenty minutes the fourteen Deleted Scenes, with yet another useful commentary track from director John Polson, editor Jeffrey Ford and screenwriter Ari Schlossberg, explain why the various scenes were deleted. With the ever handy "pacing reasons" banded about at every opportunity, for what is already a rather sedately paced film, some, but not all, of the cuts were a wise move.

The ten minute Making of Featurette has director John Polson, actors Dakota Fanning, Famke Janssen plus other cast members and production staff talking about the film. As usual, the rather interview shy Robert De Niro is no where to be seen so all of the acting praise, and essentially the entire featurette, is aimed at the young Dakota Fanning with much back slapping for the director from all and sundry. As a featurette, there is actually very little behind-the-scenes information and it all boils down to some good old fashioned PR fluff. Finally, running for just under eight minutes, the Alternate Ending section, again accompanied by an optional audio commentary from the director, editor and screenwriter, contains the same four endings which are available on the main menu. Whilst the endings are just as tedious as each other, at least you don't have watch the entire film four times in order to view them.

There's no doubting the talents of Robert De Niro, but in Hide and Seek he is well and truly wasted in such a mediocre chiller thriller, which is a bit of a pity really as the theatrical trailer promised so much. As for the chills, they are far and few between, although there is a nice little twist which wouldn't look out of place in a M. Night Shyamalan movie. Unfortunately, Hide and Seek simply decides to meander on for what seems an age without even attempting to be scary or having an apparent plot. And considering that the film runs for just over ninety minutes and you're already starting to fidget after twenty, it's all starting to look rather poor indeed. Still, some of the shine is retained by a reasonable set of extras.

I always try to look for a positive in every film so it will at least appeal to one set of genre fans. Unfortunately, I can't even bring myself to recommend this title for a rental, let alone a purchase. It really must have to go down as one of the worse and dullest horror thriller films I've ever seen. The downward spiral of Hollywood horror films continues unabated, will it ever end?