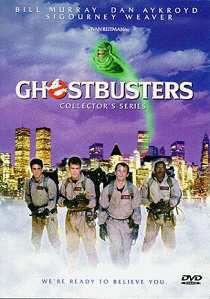 ReviewComedyAdventure
Review Article Go back to homepage
There's some strange goings on in New York and only a group of para-psychologists can save the day before the city is destroyed by an ancient and evil force.
Bill Murray, Dan Aykroyd, Harold Ramis, Sigourney Weaver, Rick Moranis, Annie Potts, William Atherton, Ernie Hudson
Comedy, Action/Adventure
1, 2
Unknown
1 Hour 41 Minutes
Thank you for supporting DVD365.net when you order using the link(s) below.
Buy DVD
Story

When Dr. Peter Venkman and his bizarre colleagues are kicked out of university and after witnessing a ghost in the New York city library archives they decide to start their own ghost catching company, aptly named Ghostbusters. Loaded with cashed from Raymond Stantz third mortgage, they set up base in an old fire station. Trouble is, business is slack and the money is running out.

When Dana Barrett discovers that her refrigerator has become a portal into the spiritual dimension she decides to consult the Ghostbusters. Unconvinced by her story, and unable to miss the opportunity to hit on the ladies, Peter Venkman visits her apartment only to discover nothing out of the ordinary.

Without any calls, and down to their last dollar, they contemplate the future. That's when the phone start to ring, and ring, and they are soon working around the clock to capture all manner of spooks. As the sightings and work load increase, all clues to the reasons behind the paranormal activity point to a bizarre and ancient cult, with the leader of the cult designing the apartment block where Dana lives. Dana, and her apartment, are about to become spook central and the battle to save Manhattan from destruction is about to begin.

The re-mastered picture quality on both discs is quite outstanding. Apart from some hideous fashions, you wouldn't believe that the film is over 15 years old, putting many newer films to shame. The colours and rich and vibrant with no signs of artifacting and it has an above average bit-rate throughout the film. The only disappointment with the picture is that it is so clear and crisp that it becomes all to easy to spot the special effects.

However, things aren't so good with the sound as little use is made of the surround channels. That said, the sound is exceptionally clear and a film from 1984 wouldn't have had the luxury of explosive surround sound. For all the effort put in to repackaging this film they could have at least made an effort to reprocess the sound to give the rear channels much more of a work out - even more so when you consider the subject content was made for something a little more dynamic than what is on offer here.

The menu system has to get a mention...If you want a menu to make you drool, then this is it. Basically, you are presented with a 3D map of some buildings with a different section on each. As you select a building, the camera swoops round to centre it on the screen...Wow. The extras are something to behold too, with so much on offer you'll be in DVD heaven.

The much trumpeted 'Live' video commentary is actually rather good, although - rather annoyingly - you have to turn off your DVD players widescreen facility to view it. Once you've done that, and like those annoying people at the cinema, you'll see the director's silhouettes as they point and gesture at the screen. Still, at least they're not each pop corn or talking on their phone. Interesting stuff, but just remember to turn your widescreen mode back on again when you've finished watching the commentary - it's a pain if you forget to do it, like me, as you'll wonder why your films are no longer in the correct aspect ratio.

There are a number of minor differences between the two discs, with the region one edition having additional DVD-ROM material whist the region two edition has multiple subtitles and a German soundtrack. I suppose something had to go in order to accommodate the additional subtitles and it's not been completely butchered into a vanilla presentation.

There is only one thing that lets the package down...That great big yellow splat on the cover on the region two disc. Why do distributors insist on doing this? It has to be said that this particular one is much worse than usual, at least The Mummy only had a small one that was at least in keeping with the colour scheme. However, saying that, the region one cover is hardly inspirational, but at least it doesn't have that ridiculous feature 'explosion' all over it.

Ever since its first showing in 1984, there has been nothing like this film. Lets face it, its a corker, and with one of the most irritating, and catchy, theme tunes ever. A great script sits happily alongside special effects which although by today's standards are nothing special, in their day they were state of the art. This film has some really outstanding moments...Who could forget the 'he's coming towards me Ray....He slimed me Ray!' scene where Bill Murray meets the disgusting ectoplasm oozing green ghost, or the 'Okay, so my girlfriend's a dog' scene. Great stuff.

All in all, if you don't buy this film there is something wrong with you, but which region you choose is down to you, it's really down to whether you speak German or want the Ghostbusters screensaver and a few additional extras.