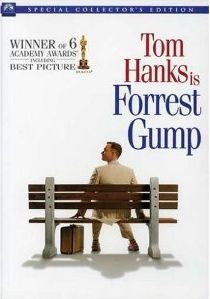 ReviewComedyDramaAdventureTom Hanks
Review Article Go back to homepage
Forrest Gump is not the sharpest knife in the drawer, but still manages to be present at some of the most important and historic moments of our time.
Tom Hanks, Robin Wright, Gary Sinise, Hanna R. Hall, Mykelti Williamson, Sally Field, Rebecca Williams, Michael Conner Humphreys
Action/Adventure, Drama, Comedy
1
2 Hours 21 Minutes
Thank you for supporting DVD365.net when you order using the link(s) below.
Buy DVD
Story

Forrest Gump is not like the other children of his age. He is slow-witted and picked on by all of the children except for one, Jenny Curran, a young girl who really sees his inner-self and to whom he will have a life long love for. It is down to Jenny that Forrest starts to make his mark on the world by proving the doctors wrong by walking properly and, when called for, running at great speed.

In later life it is this ability that get him signed up as an All-Star football player. With little understanding of what is going on around him, his team mates just give him the ball and tell him to run with it, and run with it he does! His all conquering team leads him to meet John F. Kennedy and an encounter with some Doctor Pepper.

As time progresses Forrest ends up as soldier in Vietnam and then accidental war hero. Post Vietnam he becomes a world champion Ping-Pong player and meets with Richard Nixon, even managing to accidentally assist in his down fall. With the war behind him, and on a promise to a friend he lost in Vietnam, he becomes a successful shrimp-boat captain before setting out on a epic run across America for no particular reason. However, throughout his many ups, and very few downs, he still longs for the love of his life, Jenny.

The picture quality is excellent with some bright and crisp colours and an above average bit-rate. However, there were occasions when there was a bit of outlining and, although there were no visible signs of artifacting, it was a little annoying at times. Mind you, this complaint is only a quibble and it certainly won't take away the viewing pleasure of the film.

The sound really adds to the viewing pleasure of the film with some wonderfully clear dialogue and superb surround effects. The earlier part of the film certainly lulls you into a false sense of security and you may be tempted to increase the volume slightly to enjoy the many ambient effects. During the Vietnam section of the film the entire soundstage is brought to life with the many sounds of the jungle and the relentless sound of helicopters. However, it is the enemy ambush that will have the plaster falling off the walls and the cat clinging to the curtains. Truly a sound workout of epic proportions and on par with the sound experience in Saving Private Ryan.

Surprisingly for Paramount they have found so many extras they had to place them on a separate disc. There's even a useful commentary track to accompany the film, although a commentary from Hanks would have been the icing on the cake, it is not to be unexpected that he is missing. The extras on the second disc are also interesting, with the special effects being the highlight. However, I have a feeling that some of the documentaries are rehashes of those previously available on the Laserdisc edition.

Tom Hanks puts in an absolutely wonderful performance as Forrest and richly deserved his second straight Oscar. It was the way that he portrayed Forrest's child like innocence, and the lack of understanding of the evil in the world, that really tugged at the heart right from the beginning of the film to the very last second.

Together with some excellent extras and some very clever special effects, this two disc set must be one of the bargain packages of the decade. The warm feeling that a viewing leaves you with makes it an un-missable film that should be added to your collection. Just watch that volume control!