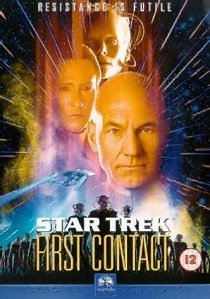 ReviewScience FictionFantasyAdventure
Review Article Go back to homepage
The Borg are back and its up to Picard and the crew of the Enterprise to save mankind....again.
Patrick Stewart, Jonathan Frakes, Brent Spiner, Levar Burton, Michael Dorn, Gates McFadden, Marina Sirtis, Alice Krige
Science Fiction, Action/Adventure, Fantasy
2
1 Hour 46 Minutes
Thank you for supporting DVD365.net when you order using the link(s) below.
Buy DVD
Story

Picture wise, things are fairly good with a consistently high bit-rate, but at times there is an odd graininess apparent which can be slightly off-putting. Sound wise things are superb with some fantastic use of the surround channels as you would expect from such a high profile sci-fi film. Indeed, the dialogue is also crisp and clear making the film a pleasure to listen to.

Extras are typically pathetic which is something we have come to expect from the Paramount stable, certainly listing two trailers as extras is indeed poor. The menu system however is rather pretty even if it is un-scored and static.

As far as Star Trek films go, this is a fairly average affair, it feels like an extra long TV. episode, rather than a full blown film, this is something that you can't say about the much better Star Trek : Insurrection. The film also expects that you knew that Picard had been assimilated in the past which is a little poor when you consider the amount of time and money that they probably lavished on the limited script.

To sum up, if you like Star Trek, you'll probably like this and if you've got the sound system then this disk has the bonus of some excellent surround, plus you'll have the benefit of seeing Deanna drunk. One for the fans then.