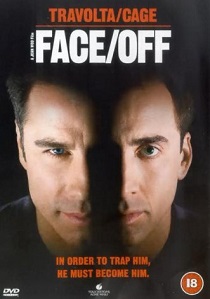 FBI agent Sean Archer has been pursuing terrorist Castor Troy for years. He became even more determined to capture Castor when the terrorist attempted to murder him at a fun fair. However, Castor missed his target and accidentally killed Sean's young son instead. Finally, after years of pursing Castor he has tracked him down to Los Angeles where he has planted a massive bomb set to go off in a few days.

After a daring battle on a airport runway, Sean manages to capture Castor but Castor is seriously injured and left in a comatosed state. Now Sean and the FBI have no way of knowing where the bomb is hidden and, with time running out, the FBI come up with an interesting solution to the problem.

By using revolutionary new secret surgery the FBI get Sean to take up the terrorists identity by physically swapping faces with Castor. Once he has assumed Castors identity he can enter the terrorist cell and discover where the bomb is located. All is going to plan until the comastosed Castor awakes and upon discovering that his face is missing forces the doctors to place Sean's face on his own. After destroying all evidence and witnesses, Castor assumes Sean's position in the FBI and, using all of its resources, sets about ridding himself of Sean.

The picture is bright, clear and sharp with no signs of artifacting and has an above average bit-rate throughout the film. However, there were times when outlining of the main characters was visible and it was distracting at times, although it is a definite improvement on the initial disc release. This was John Woo's first foray into Hollywood and his trademark slow motion action scenes are perfectly reproduced on the DVD format.

The sound is superb and truly demonstration material to test any surround system to the full. From the moment the film opens you know that you're in superb audio ride. With haunting ambient music and excellent booming explosions it is a real masterpiece from director John Woo who went on to create the equally superb audio extravaganza that is Mission Impossible 2.

This disc is one of the Buena Vista re-issues that DVD fans were carrying out for. Buena Vista was criticised, and justly so, for initially releasing sub-standard region two titles devoid of any extras and in the dreaded "flipper" format where, in the throwbacks to the laserdisc age, the disc required turning over mid film. There were also audio synch problems with some DVD players, with Pioneer models being partially susceptible.

Whereas this disc somewhat readdresses this problem, the extras are still nothing special with the now standard fare of trailer, cast biographies and a totally bizarre and pointless 'Action Overload' featurette that can only be described as a half-hearted trailer. The only redeeming point is the trailer for Pearl Harbour. Fortunately, the audio synch problems have been solved and the previously static menus have been animated and scored with reasonable effect.

There's no doubting that this is an excellent action film and it is certainly one of action director John Woo best. The character swap over between Cage and Travolta is superb and it is great to see Cage as the bad guy for a change. Mind you Travolta is only a good guy for around 20 minutes before turning into his trademark nut case.

However, the only problem is whether those people who purchased the initial flipper disc should go out and buy this disc. If you can't bare flipping the disc or you own a Pioneer player then I don't really need to answer this question for you.