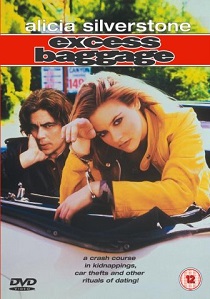 ReviewComedy
Review Article Go back to homepage
Brash and emotionally neglected by her father, desperate for attention Emily T. Hope fakes her own kidnapping. However, before she can enjoy the reunion with her father, a professional car thief steals the car she is hiding in and his life starts to fall apart as he is inadvertently drawn in to a plot to kidnap her.
Alicia Silverstone, Benicio Del Toro, Christopher Walken, Harry Connick, Jr., Jack Thompson, Nicholas Turturro
Comedy
2
1 Hour 37 Minutes
Thank you for supporting DVD365.net when you order using the link(s) below.
Buy DVD
Story

All the Emily ever wanted was a father who loved her, but her mother died when she was young and she was left to be brought up by her rich, but far from squeaky clean, father Alexander. To get the attention she craves, Emily fakes her own carefully planned kidnapping which goes totally wrong when her highly sought after BMW is stolen by a professional thief. During the getaway Vincent is pursued by the police thinking he is the kidnapper, whilst he thinks he is being chased by the police for his illicit career.

Only on reaching a warehouse does he realise that he has some excess baggage in the boot of the car. Naturally, Emily now thinks she really has been kidnapped and does her best to escape. Only when she discovers Vincent's real intentions does she inadvertently set fire to his garage and numerous other stolen cars which were part of an order for a Mafia customer.

With his garage burnt to the ground, Vincent not only ends up being pursued by some irate Mafia goons, but by Emily's 'Uncle' Ray, an Ex-FBI agent with his own unique method of investigations. We are then led on a romantic journey as Emily finally falls in love and gets the attention she craves so much.

The picture is as crisp as DVD will offer, and the surround is only occasionally called into action. This is an early disc from Columbia and has hardly any of the extras which we've come accustomed to. However, there's one bizarre glitch with this disc. On one of the cases spines the film title is incorrectly spelt as Ecxess Baggage. I assume that this must have just been a typo, but it hardly passes the quality checks does it now?

Although many reviewers panned this film, and I must admit that it does loose its way, but if you are a fan of Alicia Silverstone then it is certainly well worth owning and Benicio Del Toro's acting is certainly up to scratch.