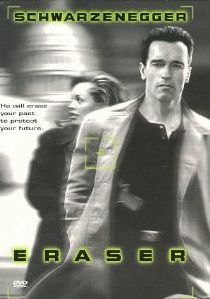 ReviewAdventureArnold Schwarzenegger
Review Article Go back to homepage
John Kruger is a US Marshall who 'erases' the lives and identities of people entering the witness relocation programme. He is assigned to protect an executive who has uncovered a deal to sell a new super weapon to the highest bidder, unfortunately the conspiracy goes high up in the government and they intend to keep things quiet.
Arnold Schwarzenegger, James Caan, Vanessa Williams, James Coburn, Robert Pastorelli
Action/Adventure
1
1 Hour 55 Minutes
Thank you for supporting DVD365.net when you order using the link(s) below.
Buy DVD
Story

Lee Cullen has approached the FBI to expose her employers attempts to sell a super weapon to the highest bidder. With the help of FBI she collects the data they needs to expose the company's misdealing and Lee thinks that she will be safe in protective custody. Unfortunately, there are people within the government who want to keep things under wraps and before John can remove her identity agents appear at Lee's house and attempt to kill her.

John is forced to come to her rescue and then use all of his knowledge and contacts to hide her from the authorities. His boss Robert is determined to stop Lee from testifying and uses all of his channels to track Lee down forcing John to fight for both of their lives.

The picture can only be described as average, being grainy throughout most of the film. Plenty of the special effects are also obvious, especially the scene where John is fighting with the CGI crocodiles and whilst parachuting from a plane. However, there are still plenty of great special effects, especially the tracer effects from the super weapons, to keep you engrossed.

The rear channels are well used through out the film, but if anything they tend to be rather predicable and unimaginative. Naturally with this type of Arnie genre film there are bullets and explosions galore and the action fan won't be disappointed.

One thing that concerns me with this film, although not really classable as back catalogue material, are the serious lack of extras. For such a big Hollywood star where is the 'making of' and even a directors commentary? The film studios are just re-issuing all of their older films on DVD at a premium price and the public are lapping them up. DVD is becoming simply a money spinning exercise for the film companies who are laughing all the way to the bank.