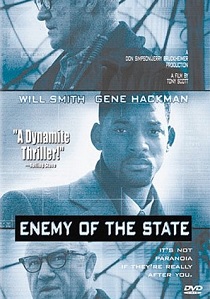 ReviewAdventure
Review Article Go back to homepage
Successful Washington D.C attorney is given, without his knowledge, a video which implicates a top NSA official to a political murder. Instantly, everything in Roberts life disintegrates as a top NSA team attempt to discredit him and retrieve the incriminating evidence.
Will Smith, Gene Hackman, Jon Voight, Lisa Bonet, Regina King, Stuart Wilson, Laura Cayouette, Loren Dean, Barry Pepper
Action/Adventure
1
2 Hours 12 Minutes
Thank you for supporting DVD365.net when you order using the link(s) below.
Buy DVD
Story

A wildlife migration expert unwittingly films a top NSA official murdering a congressman who won't support his attempts to increase surveillance laws. Fearing for his life he makes a run for it, with the NSA team hot on his heels, and meeting with Robert he drops the evidence in his shopping.

Unaware of the incriminating evidence in his Christmas shopping, Robert's live falls apart as the NSA use all their available technology to discredit him as they attempt to locate the tape. Losing his job, his wife and reputation he pins his hopes on finding the shadowy 'Brill' who can help him salvage his life.

The picture is sharp with good colouration throughout the film, especially during the darker scenes and there's no visible signs of artifacting, although some outlining was occasionally visible in the darker indoor scenes.

There is good use of surround channels with atmospheric music and sounds throughout the film. There's even the good old reliable use of a helicopter from the rear to the front soundstage. Even the techno soundtrack is well used and as a result is quite effective. However, I did notice some lip synch problems, perhaps the Pioneer 717 problem strikes again? The menus are static and some animation would have topped off this good action film.

Although this a quite a serious role for Will, we still manage to get some classic Smith. Whilst shopping for some sexy underwear for his wife he produces plenty of wise cracks and innuendo which is well worth the price of the disc alone. This film is probably Smith's best outing to date, and certainly outstrips Wild Wild West and even shades Independence Day.