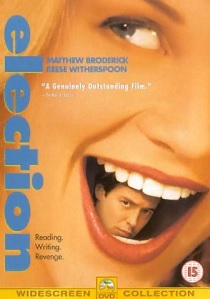 Each school has one, and you'll probably fondly remember the one at your school who really could have done with a punch in the mouth. Yes, were talking about that effervescent overachiever whose hand was always the first to go up with an answer and volunteering for each and every chore. It that was enough to make you sick then it is doing the same to Jim McAllister, a teacher at the George Washington Carver High School in Omaha, Nebraska.

This one particular overachiever, Tracey Flick, is running unopposed for the high school student council and knowing that he'll have to endure her at after school meetings, Jim decides to put a stop to her plans. Jim decides that Tracey needs an opponent and he calls upon Paul Metzler a popular, but injured, football player who's down on his luck. Jim manages to give Paul's life new direction by encouraging him to run for the election and he is elated when Paul decides to run. Tracey has now got a fight on her hands and battle has only just begun.

The picture is remarkably bright and colourful with a high bit-rate throughout the film. There are no signs of artifacting or outlining, although at times the picture did suffer from the occasional dust speck. However, these were so few and far between it really didn't cause any viewing problems.

The sound is fair, with a small amount of activity in the rear channels although it did only tend to be the incidental music. With this being a dialogue intensive film most of information came from the centre channel. The dialogue was audible at all times and there was no need to keep changing the volume settings.

However, during the middle part of the film I did notice an apparent problem with the synching. As my Pioneer player suffered synch problems with some early R2 DVD's, especially Face/Off, I'm not sure whether the problem is with the disc or my player. However, as the synch was fine during the early and later parts of the film I would have to err on the side of the disc.

As usual Paramount have decided that we are not worthy of any extras, although they did at least manage to come up with a directors commentary. It certainly makes a change from just the standard teaser or theatrical trailer, although they must have thought we were being too spoilt and decided not to include them.

The wrangling over the US election results really made this film what it is - an outstanding satire of modern day politics. With yet another great performance from Reese Witherspoon, and some great camera work, this little known film is really worth checking out.