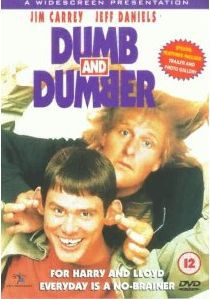 Lloyd and Harry are not the sharpest knifes in the draw, and if they were in a draw they'd probably be the rusty spoons shoved at the back. The pair have had more jobs than most people have had hot dinners and they can't hold a job down long owing to their complete and utter lack of grey matter.

Lloyds latest job is that of a chauffer and when he meets Mary Swanson he immediately falls in love with her. After driving her to the airport to catch a plane to Aspen he notices that she's left her briefcase in the airport terminal. He dives out of the car, crashing it in the process, grabs the case and heads for the gate. Unfortunately, Lloyd discovers rather painfully that the plane has already departed.

With Lloyd and Harry out of work yet again they decide to sell all their meagre possessions, including their dead pet, and head for Aspen to reunite Mary with her briefcase. What Lloyd is unaware of is that the case contains a pile of ransom money which was suppose to have been left at the airport for the kidnappers to pick up.

Suspecting that Lloyd and Harry may be professional hit men, the kidnappers follow the cross country bumbling pair and wait for an opportunity to reclaim the case and knock them off. However, they hadn't quite banked on Lloyd and Harry's shear stupidity to get them out of the many scrapes along the way.

The picture is bright and colourful with plenty of detail throughout with the high bit rate ensuring that the picture doesn't suffer from either artifacting or graininess. There's no real signs of any picture imperfections or dust scratches and its certainly beats anything that either the VHS or Laserdisc versions can offer.

Unlike the Dolby Digital region one version of the film, it is only presented in a rather bland and disappointing Dolby Stereo soundtrack. For such a high profile title it is certainly a strange decision and I would have expected a Dolby Digital soundtrack on the DVD, especially since such a soundtrack already exists.

It's not as if the disc is crammed full to capacity with additional soundtracks or subtitles as there's only the addition of a German Dolby Stereo soundtrack and subtitles. Fortunately, as the majority of the film is dialogue based there is no reason to be too upset as its not as if its laden with explosions or helicopter fly pasts.

Although the menu is scored and pleasantly animated with scenes from the film, it all turns out rather pointless when you consider the poor standard of extras offered. I would hardly call a filmography, photo gallery and theatrical trailer as breaking the bank when it comes to offering a set of worthy extras.

This is especially highlighted when you consider that all the other Farrelly Brothers films have audio commentaries and behind the scenes documentaries such as those in There's Something about Mary and Me, Myself and Irene. Judging by these previous titles there should have been plenty of additional material to really make this disc something special.

Putting the criticism of the below par extras and sound aside, the film is still definitely worth owning as Jim Carey and Jeff Daniels are just a riot. The film never has a dull moment and it will have you laughing from start to finish with childish jokes, toilet humour and plenty of other sick jokes that can only make it a Farrelly Brothers film.