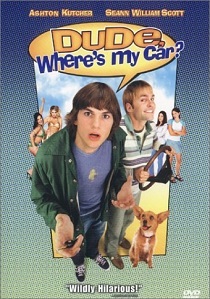 When Jesse and Chester wake up with no memory of the night before they are confident that it must have been a good party. And indeed this is confirmed when they receive an incensed phone call from their girlfriends and their trashed house. Not wanting to appear bad boyfriends, and the fact it is their anniversary, they decide to head for the girls house to give their anniversary gifts, but Jesse's car appears to be missing.

On their way to their girlfriends house they soon discover that losing the car is the least of their worries when they are apprehended by a strange group of geeky people who claim to be working for Zoltan. The group is on a quest for the continuum transfunctioner, a strange device that can save or destroy the universe. If things weren't strange enough for the pair then they are about to get much, much worse.

High school babe Christie Boner has the hots for Jesse and she certainly remembered seeing his car the previous night, well the back seat of it anyway. Chester has become the best customer at the local strip club and the pair also discover that they owe a pile of money to a "gender challenged" stripper. On top of all that a group of hot chicks are also looking for the continuum transfunctioner and are promising all sorts of favours for its return.

The picture is surprisingly good with an above average bit-rate throughout the film with some excellent amount of detail and rich colour tones. Even the night time scenes manage to produce good results with no signs of artifacting or outlining. This is certainly on par with many of Fox's other more high profile titles.

Although there is a the usual Fox trailer trumpeting how good their DVDs and menu systems are, the menu system employed here is rather a disappointment. However, it is still nicely animated with strange sound effects and extras are reasonable enough, although blink and you'll miss each of the extended scenes. The featurette is rather bland and it only manages to expose the pretentious nature of the actors, even the ones with minor roles.

Similar to American Pie and Road Trip this film is aimed at the older end of the teen market. Where as these films were genuinely funny this one is so bizarre that it wouldn't look out of place in Farrelly brothers production, even if the jokes are a little old.

Never-the-less, there are still plenty of funny moments provided by the "Nordic Dudes" and the "Hot Chicks" and I'm sure after copious amounts of alcohol it would be the perfect film to round off a evening. Sweet!