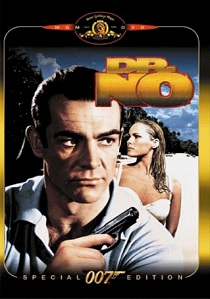 Bond is sent to Jamaica to investigate some mysterious energy force interfering with US rocket launches, but why the US can't do all by themselves is a different matter. From the moment he gets off the plane various agents try to shoot him, run him off the road and even attempt poison him with a deadly spider.

Bond is soon investigating an island owned by the mysterious Dr. No who has managed to keep the locals away with stories of a fire breathing dragon. Whilst exploring the island he meets Honey Ryder, who collects shells to sell on the mainland, and we are introduced to the first of many bond girls. Who can forget that now famous entrance from the water and walk up the beach?

For a film made in 1961 the picture quality is surprisingly good with bright colours, however I felt it had a little too much contrast. There is a high bit-rate throughout the film with no visible artifacting or outlining. There is the occasional glitch or whisker in the picture, but for film stock of this age it can be forgiven. In fact the picture is so sharp it really highlights the dire Thunderbird style special effects of the time.

The only let down on this otherwise superb disc is the sound. Ok, we didn't have the wonders of Dolby digital, let alone stereo in the 1960's, but perhaps MGM could have made an effort to re-master the soundtrack to give at least stereo.

The disc is packed with extras and I just hope MGM continue this in their further Bond releases. The Inside Dr. No documentary picture quality is absolutely abysmal. It looked like it was shot on a home movie camera of the era, but it is this that makes it a priceless additional to the extras. The animated menus are also quite attractive although the navigation around the extras menu seems a little haphazard and I got lost at times.

This film may not appeal to the newer generation of Bond fans brought up on gadgets and the special effects loaded later films, but at least we see Bond lay his cards on the table, so to speak, and get issued with his now famous Walther PPK. A classic, perhaps not, but a must for any Bond fan's collection.