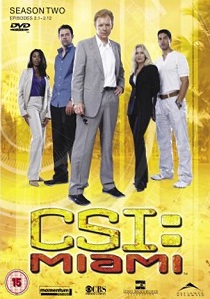 CSI Miami is based on the hugely popular original Crime Scene Investigation series set in Las Vegas and when it premiered on the American CBS television network it earned the highest rating of any network premiere in the past eight years. But this success was no fluke, it is based on a highly successful formula which, if done correctly, could be easily transplanted to any American city with a bit of a reputation and enough locations to keep the stories flowing. And in the case of CSI, they've packed their bags and headed for the sun in Miami and the sights in New York with two successful spin off series.

CSI Miami chronicles the work of the Miami crime investigators and is set against the sun, fun and tropics of the Florida tourist haven. Naturally, there's always a hidden and more seeder side to most exotic and vibrant locations, and there's always a near continual supply of suspicious deaths to investigate. Leading the team is Horatio Caine, and as an ex-bomb squad detective he is no stranger to confrontations with criminals and the underworld. If Horatio is on the case then you'd better get your story straight as this man will soon have you behind bars. His second in command is DNA specialist Megan Donner who has returned to the team after six months bereavement leave after the death of her husband.

The rest of the team is made up with the best criminologists that Miami can offer starting off with Calleigh Duquesne a bilingual ballistics expert who has the looks of a beauty queen but who can hold her own with any perpetrator, Eric Delko, a Russian Cuban Miami native and underwater recovery expert with strong ties to the large Miami Cuban community, Tim Speedle, a talented young criminologist and trace expert and, rounding of the talented team, Alex Woods, a no-nonsense coroner who always sees a body as a person with a story to tell and not simply a corpse.

The picture is bright and colourful with a high level of detail throughout with the opening credits of each episode looking particularly impressive. Although an episode has an above average bitrate, with some good black levels, at times the picture could be a little too soft and grainy which was then exacerbated by high contrast levels in some of the exterior scenes. Fortunately, image problems are a fairly rare occurrence and, far from being disappointing, some of the episodes belittled its television origins. Never the less, I have this feeling that if we still had to rely on our humble video recorders that this series would have been a picture disaster.

Given that this is a television series CSI Miami is surprisingly equipped with a 448Kbps Dolby Digital 5.1 soundtrack. Still, being a heavily dialogue based programme the majority of the action occurs in the centre channel. This dialogue is crisp and clear whilst the front stereo channels offer some reasonable stereo steerage. Although there is some reasonable use of the surround channels, it usually ended up just being musical score with the very occasional ambient effect. I also failed to detect any signs of LFE effects. Never the less, this really is a television series which continues to think that its a Hollywood film and it really does add to its viewing pleasure.

The main menus are scored and pleasantly animated with various cut scenes from the episodes playing the background. The menu transition effects are also quite effective, employing the same CGI graphics from the programme to explain an incident which occurred to an unfortunate victim. The submenus are static and silent affairs, but you really can't get confused as you simply need to select an episode from the menu. Still, it's a pity that there's no "play all" option. Once selected, and where available, you can then select whether to listen to the audio commentary.

The extras are made up of audio commentaries for the episodes Blood Brothers, Hard Time, Hurricane Anthony, Complications and Witness to Murder. There doesn't appear to be any specific reasoning behind these choices, but they're all fairly interesting and fans of the series are sure to enjoy them. None of the cast are on hand to provide the commentary and it's left to the various episode writers or director to reveal the information on the sets, the characters and the occasional accidental filming technique which paid off handsomely.

Disc two contains The A/V Lab Tour feature. Split into nine sections, which rather annoyingly can't be played all in one go, it is presented by forensic consultant Elizabeth Devine who looks at the video, photograph and sound enhancing techniques. Whilst some of the techniques used in the programme are ridiculous to say the least, at least these short featurettes do show what is possible with the technology of the day (so no picking your nose in public then).

With the original CSI being a hugely successful series it was always going to be hard to improve. So the producers and script writers got together and came up with a brilliant idea - why not keep the same gripping formula with all the crime scene gadgets and special effects and just move it to another location? This has resulted in two new series that keep the punters happy week after week. With a team of agents based in sun drenched Miami, and another now plying their trade in New York, the formula that made the original CSI such a success continues unabated. And what's more, as the series matures it simply gets better and better.

Whilst my previous Miami review had me stating that I found Lieutenant Horatio Caine's tone a bit bossy, this season has continued to see me warm to his presence with a less frosty and more caring persona which is brought to a peak in the excellent Witness To Murder episode. Mind you, those canny "gotcha" quips, his Fox Mulder stances and the stony eyes that always stare into the distance at the end of an episode continue to make me laugh as I always end up thinking of the comical endings to Police Squad. Still, who cares, CSI : Miami is an extremely entertaining series and long may it continue. It's just a pity that we continue to suffer with the half season boxset whilst our American friends get a complete season at the same price.