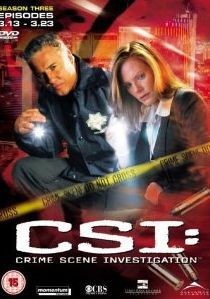 The multi Emmy award winning series Crime Scene Investigation is back with the release of the second half of the third series. There's yet more bizarre and damn right gory episodes as the CSI gang are called in to investigate a wide range of murders from a man driving with a wooden spike in his head, a decomposing body in a toxic waste drum and the return of Lady Heather in a 90-minute voyeuristic special. There's not a stinker of an episode between them, although the unfortunate murder victims may be smelling a bit by now. Saddle up and sit down in front of the television for another cracking set of episodes.

As is usual for a CSI episode, there is the main plot as well as a secondary plot to contend with. Other than the third disc, each of the three discs contains four episodes whilst final disc contains three episodes and the additional material.

For a recent television series on DVD the picture is actually quite poor with some very noticeable problems and watching CSI on a large screen television can be a bit of a nightmare at times. The picture has a reasonable amount of detail and colour depth but, overall, matters aren't helped by the many dark and night time locations where outlining and general problems with artifacting are a near constant problem. It's quite surprising to see a series of this calibre suffering from these sorts of problems, but it's quite feasible that compression issues played a major role when you need to accommodate fours episodes per disc plus an accompanying Dolby Digital 5.1 soundtrack.

Each of the episodes is accompanied by a 448Kbps Dolby Digital 5.1 soundtrack with some episodes better in the sound department than others. As a television series it's not going to rival any of the big budget action movies, but at least they've made the effort. The soundtrack has a good all round performance with some clear and precise dialogue in the centre and front channels whilst the rear channels are used for the occasional ambient effect and the audio score. In fact, sound wise, the most effective part of the programme is the opening credits and the classic Who song Who Are You? which impressively echoes around the soundstage.

The menus on each of the discs are animated with a CGI crime laboratory which is also accompanied by various computer bleeping and keyboard bashing sounds. Although the menu options are rather limited, whenever an option is selected you whiz through a nice CGI lab to the next menu.

For space reasons the extras are spread over the three discs. Disc four contains two audio commentaries from the various directors and script writers for the Random Acts Of Violence and Lady Heather's Box episodes whilst disc six contains an interactive Crime Scene Field Kit feature. This feature, presented by an former investigator, offers some useful, but rather brief, information on the tools of the trade which may be of some interest to budding investigators (or even criminals!). Details include Ground Penetrating Radar and that wonder chemical Phenolphthalein which seems to turn up fingerprints, and possibly even aliens, with alarming ease.

However, it is the two eleven minute featurettes The CSI Shot: Making It Real (on disc five) and The Writer's Room (on disc six) which offer the most interesting insights to the CSI series. The first featurette looks at the very effective special effects and camera work used to achieve the gruesome bodies and results, whilst the second sits in on a script writing session as they go about coming up with a storyline. And from these two featurettes it is quite easy to see why CSI has been so successful. One word of warning though, the Making It Real featurette refused to play on my main DVD player whilst it happily played on my PC.

I'd never really bothered with CSI when it first appeared on television in the UK, let alone showed any interest in the subsequent DVD releases. However, after receiving a set of preview discs for Season Three, Part Two I've become totally hooked. I'd always considered that British detective series, such as the brilliant A Touch of Frost, were world beaters in the entertainment stakes but there's no doubting that the superior budget of CSI has created some of the best television crime entertainment in years.

With the superior budget comes superior special effects. There's gore galore with authentic looking decomposing bodies (not that I'd know what one would look like, but I sure get the idea) that will put you off your food, realistic bullet and flesh wounds and, for the benefit of the viewer, graphic reconstructions of the CSI teams theories on the gruesome event and its effect on the body. It's so realistic that it's enough to make you want to vomit in a bucket. Hat's off to the various real life investigators and pathologists who do this grisly, but highly important, work on a daily basis.

CSI has a definite feel of X-Files to it and there's no doubting Jerry Bruckheimer's deft touches make all the difference when it comes to providing the action with no signs of the series running out of ideas. Week in, week out the CSI team manage to keep you glued to the screen as they come up with yet more amazing equipment and methods to catch the bad guys. Mind you, you can pretty much guarantee that it won't take long before their investigations turn up some DNA residue in some body fluid which can then be crossed referenced with some ex-con in their database. Spoil sport? Maybe, but I like to be picky.

The only real down side to the DVD releases of CSI is its pricing. Where as the region one edition is released as a single season boxset, Momentum has decided to release them in the UK in a rather pricey two part set which can make it rather expensive to complete the season. Shameless cash in? Possibly, but if you consider that the RRP of £39.99 is comparable with other larger region two box sets such as the Voyager or The X-files, it doesn't sound that bad, plus you can save a fortune by venturing on-line as well as not having to buy a complete season in one go.