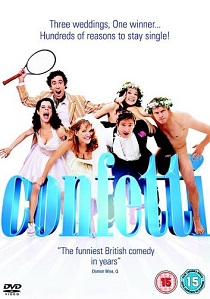 Confetti magazine is running a competition to find 'The Most Original Wedding Of The Year' and it's up to the editor to choose the three couples who will reach the final of the competition and win the grand prize of a £500,000 house, with the help of a pair of very camp wedding planners. After rejecting dozens of unsuitable couples, the magazine finally manages to decide on three couples - two would-be stars of 1940s Hollywood musicals, a pair of tennis nuts and a couple of naturists who plan to tie the knot in the nude.

Isabelle and the hugely obnoxious Josef are the most desperate to win with their tennis theme and think the others are getting preferential treatment. Matt and Sam's musical plans are in danger of being ruined by her overbearing mother, while Michael and Joanna are left reeling by the editor's rather unsurprising decision that they can't actually get married naked. Before the week is out, there will be tears, tantrums, angry sister-in-laws, disgruntled nudists and death threats with tennis rackets. But tantrums and threats aside, there can still only be one winner. So, which kooky couple is your money on?

The picture quality is of a reasonable standard, although with it having that typical "following you about" documentary look and feel to it the transfer is rather deliberately subdued. Colour and contrast wise, it's nothing special with very little depth to it. This also has the knock on effect on the general state of the transfer with outlining along with a fair amount of grain. It's all a bit of a disappointment, but then again, the film is actually attempting to portray that handheld camera look so, in that essence at least, it does actually work.

The audio is provided by a 448 Kbps Dolby Digital 5.1 soundtrack. With it being filmed in a documentary style you'd expect that the audio would be nothing worth writing home about. However, whilst the initial part of the film doesn't contain anything exciting in the audio department, the dialogue is crisp and clear in the centre channel whilst the other channels are pretty much silent. However, once the wedding day arrives and the various ceremonies starts each of the sound channels suddenly bursts into life. There's cheers and clapping from the audience in the rear channels whilst the various musical scores also put in an appearance in both the rear and front stereo effects channels. It's actually not that bad at all.

Before we get to the main menu we have to endure trailers for My Super Ex-Girlfriend, the rather interesting looking "comedy" film Thank You for Smoking and an extremely annoying advert for Maltesers that would do more to dissuade you from buying them rather than dashing out to buy a packet. However, once those have been navigated through you're greeted with a rather boring static and silent menu system that's not going to win any awards for its originality in design or execution.

Fortunately, when it comes to the Extras there's quite a good collection on offer that will help bolster the overall value of the package. First off, it's not very often you can change the outcome of a film, so if you don't like the choice of the judges why not pick your own winner? Without giving away just who wins in the main film (it's all fairly obviously really - but I'm still not going to spoil things) the static and silent Special Features menu allows you to choose from three different Alternate Endings. Again, as with the main film it's all unscripted stuff, although the picture quality isn't on par with the main film - which to be honest - doesn't really bode well.

Next up are the featurettes entitled Confetti Keeps Falling - More Tears and Tantrums. The three featurettes concentrate on the weeks before the weddings with four, two and then one week to go. In total, the featurettes last for over an hour and do add something extra to the film - almost deleted scenes if you like - and nearly as long as the film itself. Again, as with the main film, it's all adlibbed and depending on your overall opinion of the film, it can be another rather tedious affair, although the final One Week to Go featurette when the couples talk to a guidance councillor was funnier of the three. Also, an additional plus point can be given to the package as both the main feature plus the various extras are fully equipped with subtitles for the hard of hearing.

When the front cover of the DVD proudly boasts a comment of British Comedy At Its Best you have to be a little worried. After all, I've been drawn in by this statement before, only to be disappointed with some total dross that was about as funny as a heart bypass operation. So with the press full of positive comments and a cast containing members from British comedy classics such as Peep Show, Spaced, The Green Wing and The Office, you'd expect to be rolling around the floor laughing your sides out. However, an actor is only as good as the script, but in the case of Confetti it didn't actually have one and it was all left to improvisation with a minimal amount of input from the director. Hmmm, that sounds like a bit of a recipe for disaster to me.

Now all this improvisation may all work on the stage, but I don't think I managed to raise a smile, with is a shame because I do like Robert Webb and Olivia Colman. Perhaps I've seen just one too many reality style television shows to make me laugh, and although the idea behind the film is a novel one - and something that is brave and should be congratulated - but I'm afraid it just didn't work for me (but then again - shame on me - I never really did like The Office). Never the less, I'm sure fans of the more "out there" style of British comedy will love it - although I suspect everyone else just won't "get it".