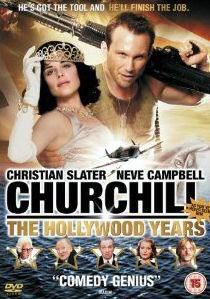 The year is 1939 and the war is not going to well for Britain. Standing alone against the Nazi onslaught and making a tidy retreat from the beaches of Dunkirk, it's looking like Adolf Hitler is going to be walking down Marble Arch in no time. That's until Winston Churchill, an all American machine-gunning action hero reminiscent of Bruce Willis, turns up at the foreign office with the newly captured Enigma machine which allow the British to decode the German messages and bring the war to a swift end. But what's with the name I hear you ask? Is it just a coincidence or is the famous image of the portly Englishman with a fat cigar, believed for decades by the public to be Winston Churchill, in fact an actor pretending to be our war time hero?

In an even more bizarre twist, it is also believed that the same Winston Churchill fell in love with the young English princess, Elizabeth. However, he was not the only historical figure to fall for the princess, with the visiting dictator Adolf Hitler demanding to be married to the young future monarch, despite the presence of his feisty lover Eva Braun. Naturally, with all this newly discovered information just waiting to reach the public domain, it's hardly surprising that the establishment has kept it a secret for years. And now thanks to one Lieutenant Ed Baker who is searching for his father, it may just be about to surface.

The picture is surprisingly bright and colourful with a richness that defies its probable low production budget. The textures are rich and detailed whilst the exotic sets and costumes look particularly impressive. Still, the usual problems with too much contrast can occasionally be a problem, especially during some of the dimly lit interior scenes, but on the whole it's not much of an issue. Also, I think that the subtle attempts to reproduce the colour levels from war films of old have also caused a few of the problems. Finally, for such a recent release the transfer is clean and free from signs of dust scratches or other picture imperfections.

The Dolby Digital 448 Kbps soundtrack is surprisingly effective with some excellent surround effects, thumping LFE's from the bass heavy soundtrack (especially during the Siegfried Line Rap) and some clear and precise dialogue in the centre channel. But it's the surround channels where Churchill : The Hollywood Years truly shines. With plenty of action effects, the musical score and an abundance of ambient effects making their way to the rear channels, it's one of the most dynamic soundtracks you'll hear in a long time. And what makes it all the surprising is that's it's a British film and it's been made on a tight budget too. Full marks to the director and producer.

The main menu is pleasantly animated with cut scenes from the film as well as being scored. There's also some nice transition effects between the menus, with no menu left static and silent, whilst the Special Features menus are particularly impressive. Even more surprisingly, the menu system is scored in full blown Dolby Digital and once the film starts you get a nice flyby from a couple of aircraft (American, naturally). Extras wise, for what is a fairly low key film, there's a good selection on offer which manages to give the package a much needed boost.

The main extra on the disc is the Commentary with Christian Slater and Director Peter Richardson. And to be fair to Christian Slater he's thrown some weighty enthusiasm behind this project and gives a rather interesting and friendly commentary. Whilst there are some quiet moments, probably as they sit back and enjoy the film, the pair will occasionally burst into life with various quips about the lines, scenery or clever locations to fool us into believing that we're in 1940's Britain.

In the rather interesting fourteen minute Behind the Scenes featurette Christian Slater and Neve Campbell are just a few of the stars who are interviewed. Naturally, everyone praises just about everyone going and how they enjoyed working with such-and-such (although I suspect that some of the American cast members haven't heard of half the British comedians). They all talk about the film and their roles and even Christian Slater admits to Hollywood's outrageous obsession for changing history to suit their films. The featurette is also scattered with a few small clips of behind the scenes footage, bloopers and deleted scenes. All in all it's quite a good featurette with sufficient information to keep you interested throughout.

In the nineteen minute Churchill : The True Story Mockumentary, soldier Lieutenant Ed Baker uncovers the true identity of his father and how his incredible actions during 1939 changed the course of history. Along with plenty of clips from the film, Ed Baker narrates his way through the various "true" events of World War II and even finds himself in downing street interviewing the Prime Minister and other members of the military. It's a great "documentary" and it manages to inject some much needed value into the package with some additional footage clearly made for the featurette.

With an optional commentary from director Peter Richardson, the five minutes of deleted or extended scenes are of little value, although the scene with Eva Braun ringing into a radio talk programme is reasonably amusing. Richardson does his best to explain the reasoning behind the cuts, and to be honest it makes a change to find a disc with a commentary rather than having to decide for yourself. However, it's the usual problem with pacing that is the prime reason for the majority of the cuts, whilst some of the jokes didn't play too well.

Again, with an optional commentary from the director, the two minute Alternative Beginning and Ending contains the original idea of opening and closing the film with a group of Hollywood producers re-writing history. Fortunately, these scenes were dropped and the film is much better without them. Still, it's nice to see them included here. Things are rounded off with a minutes worth of unfunny Outtakes whilst the Theatrical Trailer and four TV Spots are included for good measure. All in all, it's a good selection of extras which fans of the film are bound to enjoy.

With the likes of the forthcoming war film Battle of Britain and the existing titles U571 and Saving Private Ryan, Hollywood has the nasty habit of rewriting our history and removing Britain from the heroic exploits of World War II. Ask some of today's youngsters brought up on a diet of Hollywood block busters and you'll be hard pressed to find anyone who realises that our grandfathers also made the ultimate sacrifice in the defence of our freedom. So, what better way than to fight back with our great, and rarely understood outside of these shores, sense of humour.

And in the case of Churchill : The Hollywood Years the comedy fight back is in the form of some cutting satire which pokes fun at not only Hollywood but also at the British. Trouble is, it helps if the satire is any good and it ultimately struggles along with very few laughs, and most of those come from the minor roles. It simply tries too hard to be a modern Monty Python and, rather unfortunately, it fails. I can't even think of a scene where either Christian Slater or Neve Campbell made me laugh. It really is a missed opportunity to poke some much needed fun at those history altering Hollywood moguls.

Still, I actually remember the Comic Strip Presents when it was originally broadcast on Channel Four and it was wacky and weird then. Perhaps this comedy is simply too surreal for me to appreciate. Never the less, there are some plus points. Christian Slater is obviously game for a laugh (or the pay cheque at least - which to be fair can't have been that much) whilst Harry Enfield is certainly worth his laughs as a clueless King George V who gives a possible indication of what the bumbling Charles will be like when he finally reaches the throne. Even the inimitable Jon Culshaw and his impression of Tony Blair is worth a look in.

In what is an extremely average film, which I'm sure will completely sink without a trace outside the UK, Pathé have certainly done a good job in presenting the film in a more attractive manner. The menu system is clever whilst there's a good selection of extras to keep the faithful fans happy. Whilst it may not attract a massive fan base, or a large amount of sales, it may at least be worth a rental for those curious types.