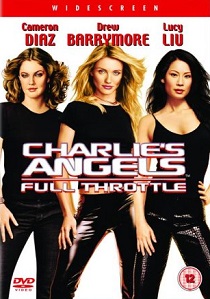 When the Natalie, Dylan and Alex drop into a Mongolian terrorist camp to rescue US Marshall Ray Carter, as usual, the ladies kick ass, fly out of windows, avoid bullets, shells and missiles, finally dropping into a helicopter, pretty much everything goes to plan. But in the process of being rescued the Marshall looses his ring. But this is no ordinary ring as Carter is the wearer of one of two rings which contains the true identities of thousands of people on the FBI's witness protection plan. Naturally, if somebody were to come into possession of these two rings they could be very valuable to certain criminal parties. But when the wearer of the second ring is murdered and his ring stolen the Angels are called back into action to help Carter recover the rings.

But when some of the informants in the witness protection programme start turning up dead it looks like the list is already out in the open. Realising that a criminal gang may already be in possession of the list the amazing detective skills of the Angels soon discover that the assassin is a surfer and, with the assistance of a bumbling Bosley, head to the beach to investigate. It doesn't take long for the girls to identify the assassin but in doing so Natalie bumps into an old friend, and ex-Angel Madison Lee. Why was she at the beach? Did she have something to do with the theft of the rings?

With yet more amazing detective work the Angels track the assassin down to a dirt bike track and are soon involved in a daring bike race in order to protect the killers next target. However, the girls are not alone as a knight in shining armour, well OK black, helps them save the day. With vital information collected from the assassin, and the mysterious knight, they soon find themselves monitoring and infiltrating the O'Grady gangs hideout and recovering the rings. However, Dylan has kept a secret from the Angels which may cause things to get out of hand. Are their array of disguises, espionage and martial art skills going to be enough to save the day?

The picture is bright and colourful with a high level of detail and average bit-rate throughout. There is such a abundant range of colours on show and they are all handled wonderfully with little or no outlining and artifacting. Whilst some people may object to the fact that the colours can be a little over the top at times, I think it really adds to the superb visuals on offer. It's a definite case of director McG going back to his music video roots. Although the majority of the film takes place during the day the night time scenes are just as impressive as the day. The picture detail remains top notch whilst the contrast levels never get out of hand and ensures that the blacks remain solid and the various characters don't succumb to any outlining problems.

Although some of the stunt work performed by the girls looked near impossible to perform, on the whole the CGI effects looked realistic enough and added to the overall fun of the film. However, the only time it did look a bit iffy was during the amazing opening scenes where the Angels, in James Bond escape fashion, are flying through the air in hot pursuit of a helicopter. Mind you, it's not the sort of thing they're going to be filming as live action now is it?! As to be expected for a recent release, the picture also remained free from dust specks and other picture imperfections.

Action films really do rely on the sound to help keep things interesting. Fortunately, Charlie's Angels : Full Throttle is one of those few films where the sound really does shine through. From the moment the film starts your surround system is given a serious work out with a brilliant soundtrack (well worth checking out the music soundtrack CD), superb LFE effects to rattle the furniture, excellent stereo steerage and a surround channel which is hardly ever silent. This is definitely one of the few films which requires a high listening level to really appreciate the on screen action, just remember to wait until the neighbours go out. The opening eight minutes of the film justify the discs purchase alone and if you don't already own a surround system then a demo with this disc will have heading for the shops.

Whilst the overall sound performance is on par with some of the best action films there were a few occasions when there was a definite problem with the dialogue. Not only was a swear word blanked out (no doubt to lower the films BBFC rating and raising the question of purchasing the region one "Unrated" edition) but the dialogue could become crackly and electronically distorted for short periods. This was either a simple problem with my preview disc or a more serious error with the encoding. Fortunately, the problem was only discernible a few times during the film and it didn't really spoil things too much. Let's just hope the retail release doesn't suffer the same problems.

The menu system is pleasantly animated and scored, although the menu layout can be a little confusing at times, and the disc is accompanied by a good selection of extras. However, I just wonder whether this single disc presentation could have been pushed onto two discs with a DTS soundtrack added to the already excellent Dolby Digital track. Perhaps in the near future Columbia Tri-Star will release a cut down Super-bit version with a DTS soundtrack. And with the visuals already on offer here, it would be a cracking disc to own.

The film is accompanied by two audio commentaries. One yack track is from director McG whilst the other is from the writers. The McG commentary is the best by far and includes a rather novel method of highlighting particular points of on screen interest via the use of a light pen. McG goes into plenty of detail regarding the cast and crew and even divulges many of the CGI secrets, although to honest you can easy spot the work of the computer. Never the less, it's more than interesting. The writers track is certainly worth a listen to but if you ever want to swap between the two yack tracks you can't just select the relevant audio track via your DVD remote. Instead, you have to do it via the audio menu so it quickly becomes rather tedious and you'll end up either not bothering or just sticking to the one track.

If you fancy a bit of an information overload session then you can also enable the on screen trivia track. As the film progresses you get presented with various, and to be honest rather pointless, fact and figures about the film plus the ability to cut to behind the scenes footage when a "follow the white rabbit" style speaker box appears on the screen. Once the film is over then you can explore the rather bumper, and mixed bag, of features.

Rather than providing a single featurette on the making of the film they've been split into a number of short featurettes. Whilst they do cover different subject matter there is a definite "bulking out" feeling about them. Never the less, some are more interesting than others with the XXX-treme Angels featurette on the filming of the Moto-cross scenes being the most interesting. Whilst in the film it's one of those mindless plot diversions, the footage here is quite fascinating and it varies from dressing up champion bikers in costumes and wigs (will they ever live than down?) to strapping a camera to a bike and racing it around the track. There's also an eye candy feature on the Pussycat Dolls dancing troupe used in the film. Here you'll learn that the dancers are real and have contained, and still employ, some interesting stars. Quite why they were in the film is never really explained, but quite frankly with stunning dancers and provocative dance routines, who cares!

There are a number of featurettes which deal with the fight scene choreography, the cars used in the film (well worth checking out if you like sports cars), the costumes design, CGI effects used for the films opening sequence and a behind the scenes feature on the films production. Also present is a Jukebox section where McG discusses the songs used in the film. Enjoying the music used in the film I was expecting to hear an isolated score. Unfortunately, after a rather pointless introduction by McG and his music supervisor you're taken to the section of the film where the music was used. Whilst on the subject of music, the awful Pink and William Orbit video "Feel Good Time" is also available for a viewing.

There's also some great cameo's in this sequel with John Cleese being my favourite. He plays Alex's Dad and he has no idea that his daughter is a special agent, instead thinking she works in a hospital. Unfortunately for Alex he bumps into her boyfriend Jason (Matt LeBlanc, still playing "Joey" from Friends) who, assuming he knows what his daughter does for a living, manages to get him to think that his beloved daughter is a prostitute. It's hilarious and it's a scene that only Cleese can pull off. If you're still puzzled by the number of cameo roles in the film then there's a useful Cameo-Graphy section where it lists the stars (with quite a few I'd never heard of) along with giving you the ability to jump to the scenes where they appear.

Charlie's Angels : Full Throttle is definitely one of those fun popcorn movies which will do so much better in the home market than at the cinema. With a plot which is as threadbare as a tramps jumper you can settle down with a beer or two, turn off the grey matter and sit back and enjoy an action/comedy film where a bevy of beautiful ladies kick some ass. It so tongue in cheek you'll be laughing from start to finish and you'll be left wondering just where the last hour and a half went. If you didn't like Charlie's Angels, then you're unlikely to enjoy this film either, but fans of the first will surely lap this one up too.

The sheer fun factor of Charlie's Angels : Full Throttle makes it one of my films of 2003. Highly recommended.