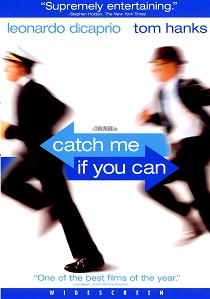 Spielberg's last two films, Artificial Intelligence and Minority Report, were really dark and gritty subject matter and as a result their pictures were dull and sullen. However, with the change to more upbeat subject matter Spielberg was free to throw as much colour as possible to the viewer. The result is a film which contains a multitude of rich and vibrant colours that is reproduced in superb detail - so much so that if you whipped out your fondue set you'd think you were in1960's America.

There are no signs of pixelisation or outlining and the above average bit-rate ensures that there is no artifacting. As expected for a film of this calibre, the print is pristine and free from any picture noise or dust scratches. When I originally saw the film at the cinema I was impressed with the colour level and detail and my mind was soon set thinking about what the DVD would offer. I needn't have worried. It is awesome and it's sure to grace many a demonstration room. It's a truly remarkable effort and a credit to the DVD authors.

As of late DreamWorks has been supplying their films with both Dolby Digital and DTS soundtracks. As a result any additional material tends either to be dropped or placed on a supplementary disc. Fortunately, the later has been chosen and we have a number soundtrack choices and a superb set of extras.

To go with the three personas in the film, the menu system also allows the selection of one of three identities. Once selected, a set of superbly animated and scored menus will be displayed with either a pilot, doctor or lawyer stance. It's a simple, but brilliant idea which really adds to the presentation of the disc. A bonus point for ingenuity.

With the Dolby Digital and DTS soundtracks taking up valuable space the extras have been given their own disc. And what an interesting collection of extras they, especially anything to do with the real life Frank Abagnale, and are essentially made up of behind the scenes featurettes with Frank, the director and the various actors. The various documentaries are grouped in a number of categories and can be played individually or as a complete set. All in all, these documentaries run to just over an hour in total. Whilst the documentaries are of a high quality the other extras can really only be classed as filler material. Even the filler to end all fillers, the theatrical trailer, is missing.

From this multitude of information I certainly learned something about the arrogance of some of these big name Hollywood stars. They sit and complain about the number of hours they have to film and then spend ages wondering just what their motivation is and telling the director how to direct. Listen, I'll tell you what the motivation is. It's a $20 million dollar pay cheque and 5% of the gross profits, that's what! Tsk, just who are these people!? Fortunately, fame and fortune hasn't gone to all of the cast and crew members heads.

I still find myself shocked at the sheer gullibility of the people who allowed him to get away with the things he did (not all of his scams are shown in the film). However, I guess he came and operated in an age where people trusted a person in uniform and they left their doors unlocked at night. With an extraordinary story, an all round fun film and the directorial brilliance of Steven Spielberg, do yourself a favour and get yourself this disc. Highly recommended.

Special Features
Related Articles
Inferno, Larry Crowne, Forrest Gump, Saving Private Ryan, The Post, Sully: Miracle on the Hudson, Inferno, A Hologram For The King, Bridge of Spies, The 'Burbs, Captain Phillips, Cloud Atlas, Extremely Loud and Incredibly Close, Larry Crowne, Toy Story 3, Apollo 13: 15th Anniversary Edition, Road to Perdition, Angels and Demons, Apollo 13, Apollo 13: Special Edition, The Burbs, Cast Away, Catch Me If You Can, The Da Vinci Code: Extended Cut, Forrest Gump, The Green Mile, Road to Perdition, Saving Private Ryan, Toy Story: The Ultimate Box Set, Forrest Gump: 25th Anniversary Edition, Toy Story 4, A Beautiful Day In The Neighbourhood, The Green Mile: Ultimate Collector's Edition
The Addiction, Nine Lives, The Jungle Book, Eddie The Eagle, Jersey Boys, Heaven's Gate, Stand Up Guys, A Late Quartet, Seven Psychopaths, King Of New York, Kill The Irishman, King Of New York, Hairspray, Click, A View to a Kill, Antz, Batman Returns, Blast from the Past, Catch Me If You Can, Excess Baggage, Man on Fire, Sleepy Hollow, The Stepford Wives, The Deer Hunter: 40th Anniversary, King of New York, True Romance: Limited Edition, Wild Mountain Thyme, The Outlaws: Series 1
Inception, The Revenant, The Wolf of Wall Street, The Great Gatsby, Django Unchained, Inception, Shutter Island, Body Of Lies, Titanic: Deluxe Collector's Edition, The Departed, The Beach, Catch Me If You Can, Once Upon a Time... in Hollywood, Once Upon A Time In Hollywood
The Amityville Horror, The 33, Sisters, Capricorn One, The Car, Last Chance Harvey, Catch Me If You Can, Gas Food Lodging
Arrival, Nocturnal Animals, Batman v Superman: Dawn of Justice, Lullaby, Big Eyes, Her, American Hustle, Man of Steel, On The Road, The Muppets, The Fighter, Julie & Julia, Night at the Museum 2, Miss Pettigrew Lives for a Day, Standing Still, Catch Me If You Can, Serving Sara, Arrival, Sharp Objects, Vice, Dear Evan Hansen
Anne of Green Gables, Badge Of Honour, Amazonia, Grace And Frankie: Season 1, Badge Of Honour, Fighter, The Double, The Amazing Spider-Man, The Way, Apocalypse Now: Full Disclosure Edition, Apocalypse: The Second World War, The Departed, Who Killed the Electric Car?, Catch Me If You Can, The West Wing: Season 7, Badlands: The Criterion Collection, Apocalypse Now - Final Cut, Judas and the Black Messiah
In Treatment: Season 2, Catch Me If You Can
Annabelle, Journeyman: The Complete Series, The Pursuit of Happyness, Catch Me If You Can
Catch Me If You Can
Catch Me If You Can
Catch Me If You Can, The Watcher
Catch Me If You Can
Comments
RecommendedView