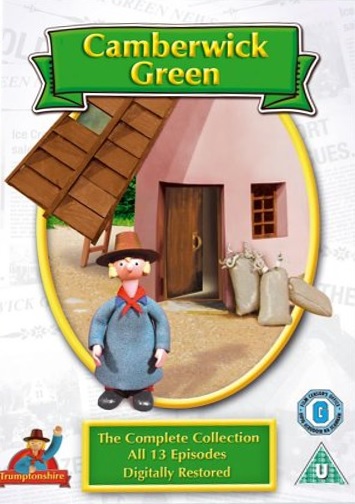 ReviewTV SeriesFamily
Review Article Go back to homepage
Who's in the music box today? Could it be Windy Miller, Captain Snort, Mr. Murphy, Mrs. Honeyman or one of the students of Pippin Fort? So sit down and enjoy the many stories from Camberwick Green
Brian Cant
Television, Family
2
3 Hours 16 Minutes
16/04/2007
Buy DVD
Story

"Here is a box, a musical box, wound up and ready to play. But this box can hide a secret inside. Can you guess what is in it today ?" Each episode of Camberwick Green starts with that famous quote followed by a shot of a rotating musical box playing a tune. The lid of the rotating box then opens and one of the characters emerges from its depths. After a brief introduction to the character, and much waving and nodding from our star character, our story begins...

As with the two later series of Trumpton and Chigley, this series is set in the small village of Camberwick Green, part of the county Trumptonshire. This small and busy picturesque village is inhabited by a number of interesting characters, one of which appears out of the top of the music box and becomes the focal point of the days activities in the village. This usually involves a meeting with Windy Miller, the owner of an old windmill who refuses to leave the old farming methods behind, Mrs. Honeyman the town gossip who's always carrying her baby and twittering about something, Mr. Murphy the Baker (and his son Paddy) who is nearly always out of eggs, flour or milk and Dr. Mopp who makes house calls in his vintage car. There's also a fair number of other people in the village too who we'll bump into during our stay in the village.

To celebrate the programmes 40th anniversary, each series has been fully restored using state-of-the-art technologies to reproduce the original broadcast quality of colour and sound. Unfortunately, it doesn't appear that this state-of-the-art technology has worked particularly well. The picture is not only grainy, but it suffers from a poor level of colour and detail (although it is probably still far superior to the original print), whilst the first episodes picture is extremely unstable. Still, it was from forty years ago and you can't always expect miracles and any problems with print damage has been cleaned up nicely. Never the less, I just hope that the image stability issue was a problem with my preview copy.

The 224Kbps Dolby Digital 2.0 soundtrack is not going to inspire many, but the audio is reasonably clear and audible with Brian Cant's singing and narration just as annoying now as it was back some forty years ago. Never the less, Camberwick Green can be a bit of pain at times with some uneven audio levels causing you having to increase then decrease the volume at fairly regular intervals. Naturally, given the programmes rather ancient vintage, that expensive surround system can be turned off and your ordinary television speakers used instead. Again, given the rather poor quality of the audio quality here, it's actually quite hard to identify just where this state-of-the-art technology was applied.

The menu is scored with the opening musical box tune and animated with a waving Windy Miller and his mill. Selecting an option from the menu will cause the windmill to turn and bring the next option into view which can then be selected. Extras wise, there's a gallery with a whopping eight pictures of no real interest, although there is a map of Trumptonshire (if you can manage to read and decipher it), whilst the only other extras is a Trailer Gallery for Right Entertainment's other titles Trap Door, Trumptonshire, Lavender Castle, Postman Pat and The Great Dinosaur Hunt and Little Red Tractor - Glorious Mud. They're all children's titles, but then again, it's hardly surprising since the disc is aimed at the younger end of the market..

The brainchild of Gordon Murray, Camberwick Green started on BBC1 on 3rd January 1966 for a run of thirteen episodes. Narrated by that most famous of children's television presenter Brian Cant, his singing skills were hardly going to win the X-Factor, but his distinctive voice and his embarrassing acts on Play School were synonymous with children's television for a whole generation. This wonderful series proved to be such a success that another two series were commissioned with the equally popular Trumpton and then Chigley following suit.

Even though thirty nine episodes were only ever made (thirteen per series) they still manage to remain one of the most popular children's programs ever made by the BBC. So it's hardly surprising that the series eventually found its way to our silvery friend. And, boy, what a nostalgia trip it was and once the music box and its tune burst into life all those memories came flooding back. Ok, so the stories are hardly taxing, which included such troublesome things as delivering the post, the doctor doing his rounds (naturally, not out of hours) and the milk delivery. I also suspect that Windy Miller is some sort of local mafia boss as if anything ever happened in the village, Windy was always there with his cheaper alternates such as his own flour, eggs and milk. So, Windy, was that incident with the milk float really an accident?

Whilst the "fully restored" tag seems to be a bit of an overstatement, with a picture looking far from it times, Camberwick Green is still a wonderful series to own on DVD. With simple stop/go animation along with hardly any facial movements, it's animation at it's most basic. I mean, how much simpler could you get than with nodding and waving? Never the less, it's all wonderful entertainment which is made all the better by the simple fact that it's the first of the Trumptonshire trio. Enjoy the nostalgia, get yourself Camberwick Green on DVD. Highly recommended