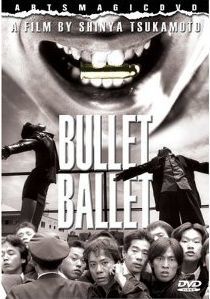 ReviewDramaThrillerWorld Cinema
Review Article Go back to homepage
A man sees his life changed for ever when his fiancee shoots herself and becoming obsessed by the need to posses a gun, he begins his willful downward descent into violence.
Hisashi Igawa, Kirina Mano, Kyoka Suzuki, Shinya Tsukamoto
Drama, Eastern Cinema, Suspense/Thriller
1
1 Hour 27 Minutes
Thank you for supporting DVD365.net when you order using the link(s) below.
Buy DVD
Story

Goda, a successful director of commercials, has his life taken apart by the suicide of his girlfriend, who has shot herself with a gun that she was holding for a friend. Becoming obsessed by the need to posses a Smith and Wesson Chiefs Special, Goda begins his wilful downward descent into a whirlpool of violence. The film traces his efforts to access the Special and his dawning realisation of the use he is to make of it. Shot in luminous black and white, this disturbing production maps out the deep need of humanity to make war; in fact, its need to create war. Hmmm. Quite.

Naturally upset at the death of his girlfriend, the 'hero' goes in search of a gun and gets himself beaten up. This does not seem to deter him, as he goes out again and puts himself in the same situation and gets beaten up some more. He eventually ends up joining forces with the gang that kept beating him up to stop whoever is bumping them off?

Shot in black and white for artistic merit it comes across as trying too hard to be all moody and brooding. Still, credit where credit is due, the transfer is good enough and, although the picture suffers from a hint a grain and the hand held camera shots are just a little too on the jerky side for my liking, the contrast levels are good with a minimal amount of print damage.

Given it's a Japanese film it is hardly surprising to find that the 448 Kbps Dolby Digital soundtrack is in Japanese. Still, with the minimal amount of activity in the surround channels and a set of subtitles to concentrate on the dialogue you don't need your ears to be under too much stress. Still, if you speak and understand Japanese then the dialogue is clear enough, even if most of the dialogue was of the single sentence variety and at times seemed as if whole chunks of it were missing. For the rest of us, the subtitles are a must, even if the font is a little on the big side.

The menu is static but scored with a rather angry sounding rock soundtrack whilst the subsequent sub menus are static and silent affairs. The menus are easy to navigate through whilst, other than the selection of the optional audio commentary, the extras are contained on a single menu.

Apart from the audio commentary, the main extra on the disc is the thirty five minute Interview with Shinya Tsukamoto. Fortunately, Artsmagic appear to have been listening to my previous criticism of not providing chaptering as the interview here is split into separate chapters for each question and answer. Unsurprisingly the interview is conducted in Japanese so the subtitles are a must here and rather than being simply burnt onto the image they can be selected from the menu. Content wise, the interview will be of some interest to the fans, as Tsukamoto carries out the standard interview discussions of his motivation and methods of film making.

The Promotional Material section is a huge disappointment as, in most cases, this tends to mean plenty of lobby cards and promotional posters to browse through. However, all we have here is a single lobby card accompanied by some text which is so small I could hardy make out what it said. Also included is a fairly detailed set of filmographies for Shinya Tsukamoto, Kyoka Suzuki, Hisashi Igawa and Kirina Mano. As with previous Artsmagic releases, these are presented as text pages which are navigated through via the remote.

Things are rounded off by a number of poor quality, but fortunately subtitled, Theatrical Trailers. All in all, the extras are a bit of a disappointment and not up to the usual high standards offered by previous Artsmagic releases such as Young Thugs : Innocent Blood and Young Thugs : Nostalgia. Still, I guess you can't come up trumps at every release and there still should be some praise for the amount of time and effort put into their releases.

While it is a violent film, it is shot in such a way that it is not explicitly so and thus manages to escape a more restrictive rating. But that said, you are still in no question as to what is going on. There will be people who will like this film, with Japanese cinema fans surely loving every moment, but as a general film fan I did not find it interesting enough to warrant future viewings. I could not get into this film at all and was forever looking at the counter to see how much more I had to endure. It's definitely a film for the fans only.