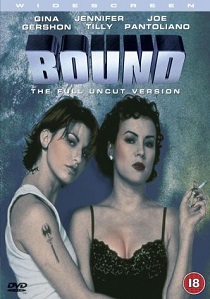 Review Article Go back to homepage
Caesar lives the high life and launders money for the mob. There's $2 Million dollars in a suitcase sitting on a desk in his Chicago apartment and the mob are on their way to collect. The last thing he expects is his girlfriend and her lesbian ex-con lover to come between him, the money and the mob.
Gina Gershon, Jennifer Tilly, Joe Pantoliano, Mary Mara, Susie Bright, Barry Kivel, Christopher Meloni, John P. Ryan
Crime, Drama, Suspense/Thriller
2
1 Hour 44 Minutes
Buy DVD
Story

Written and directed by the now well known Wachowski 'Matrix' brothers, and starring Joe Pantoliano who must have made an impact with the boys for him to appear in The Matrix, we get a rare mainstream, if a little bland, girl-on-girl action thriller which keeps you on the edge of your seat throughout.

Caesar has been given the job of laundering, literally, a large stash of stolen money covered in some poor unfortunates persons blood. Unfortunately for Caesar, his girlfriend Violet and her newly acquainted ex-con odd-job lover Corky hatch a plot to relieve him of the money. As is usual for film of this genre, nothing goes to plan as the plot twists and turns at breakneck speed with a cracking ending.

The majority of the film is contained within the apartment with only a few glimpses of the outside world. This must have been a boon for the set designers as when we do venture out of the apartment it is only to the empty one next door which Cork is decorating.

Owing to the film's setting, the picture can be very dark at times but it is nothing which DVD cannot handle. However, I would expect that the video and Laserdisc versions are of a rather poor picture quality. The surround is hardly called in to action, but it is not something you'd really notice.

If you are expecting a lot from the claims of the 'full uncut version' on the cover and all the whispers of hot lesbian lust, then you'll be greatly disappointed. With this being mainstream material you won't be getting a Playboy special here, and if that is what you're contemplating then don't bother with the film. However, if you're up for a great thriller with an unusual love match then you'll love it.