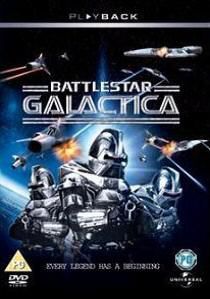 After fighting a thousand year war with a robot race called the Cylons, the twelve colonies of mankind were excited that peace between the two worlds was finally going to occur. Whilst the various human home worlds celebrated the peace, the entire Battlestar fleet was moved to a star system in order meet the Cylon imperial leader and negotiate an end to the devastating war. However, the peace treaty between the worlds was a diversionary tactic to draw the fleet away from the colonies, leaving them open to attack whilst the fleet was not protected by its usual fighter cover.

With the fleet and worlds left defenceless, the commander of the Battlestar Galactica remained uncomfortable of the Cylons true motives and decides to dispatch two fighters on a routine patrol. But when the fighters uncover a Cylon attack fleet it is already too late to stop the attack. The fleet is soon under heavy attack and the now defenceless home worlds are being attacked and the cities destroyed with no resistance. Changing course and heading back towards the home worlds, the Galactica manages to repel the attack, but not before all of the other Battlestar ships, along with the council of twelve, are destroyed. With only the Galactica remaining, and the Cylons still in pursuit, Commander Adama orders all of the remaining ships to pick up survivors and join them.

Protected by the remaining Battlestar the survivors flee in any ship that can fly, and with any supplies they can lay their hands on. All this rag-tag and makeshift fleet now needs is a safe destination away from the Cylons. This is when Commander Adama tells the survivors of a thirteenth colony located in distant galaxy where they were suppose to originate. It is to be their salvation, and with their planet's advanced technology, they will help them finally defeat the Cylons. But where is this galaxy, and what was this planet called? Commander Adama is unsure of the location, but he knows that the planet is known as Earth...

Given the age of the film stock, and especially since it had a limited release in cinemas - of which this appears to be the source material - the quality of the transfer is actually quite good. Sure, there are still problems with dust scratches and other imperfections related to the age of the film stock, but the colours are reasonably rich and vibrant, whilst there's a good level of detail, even if it's fairly grainy throughout. However, the only perceived problem with the picture transfer is the fact it really highlights just how bad the special effects are. Sure, they do look good - for a film back in 1978 - but the various models can be clearly seen overlaid onto the background.

With its age comes an equally aged, and rather disappointing and uninspiring, 192 Kbps mono 1.1 soundtrack that really sends you back to the golden age of television. It's such a lifeless and muffled soundtrack that, if possible, you can save yourself some electricity and dispense with the surround system completely. There's also the odd occasional where the sound is so muffed or drowned out by explosions or the musical score that the subtitle track is required in order to pick out just what is being said. It all adds up to take a rather big shine off things.

The menu is a static and silent affair whilst the extras are hardly the most exiting in the galaxy - with two sets of static text containing Production Notes and Cast and Filmmakers Biographies on the important players. Sure, the film has pushed the two hours barrier, but where are the trailers for the classic and new series? I guess the target audience may already own the other DVDs in the collection, but it was a bit of lost opportunity to highlight and promote the other programmes - especially if this reviewer hasn't yet seen the new series.

Battlestar Galactica : The Movie is not really a proper movie at all - it's simply the concatenation of the three Saga of a Star War episodes from the television series. Mind you, I'm not complaining as it still manages to a highly entertaining romp - although there is a slight caveat. If you already own the complete twenty four episode series box-set then you'll discover that the episodes are already present and correct. However, where it does differ is in the all important aspect ratio. The series box-set is presented in a cropped 4:3 format, but the version here is in anamorphic widescreen. Never the less, not having seem the complete box-set, I can't confirm or deny whether it's the original aspect ratio or something that has been "fiddled" with.

Battlestar Galactica is an unusual television series indeed. Created back in 1978 on the back of the Star Wars phenomenon, American television company ABC spotted the potential for something special and a big budget television series was created. It was certainly a risk and, for a while at least, it paid off before a sci-fi weary public got fed up with the weakening scripts and the now rather infamous reusing of special effects material on a weekly - if not on minute by minute - basis (hey, it was a television series after all!)

So for some strange reason that I'm still trying to understand - perhaps it was yet another sci-fi reawakening thanks to that darn Star Wars film again - Battlestar Galactica has been reborn into a rather excellent series with a few extra dollars available for special effects (thanks to a computer rather than a model on a bit of string, an explosive charge and a pile of flour). So, it makes perfect sense for the cash cow to be prodded once more and old material dug up and re-released. Never the less, I'm not complaining as I grew up with the original series and it was great to see it again - and this time in widescreen.

I guess the cheesy dialogue (it even had me cringing and laughing at times) and those repeating special effects may put off some (you could make one heck of a drinking competition out of it!), but for true fans of the both the new and old series it's a bit of a bargain purchase for a rather underrated programme. It's just a pity that the lack of true extras and the poor quality soundtrack takes the shine of things somewhat.